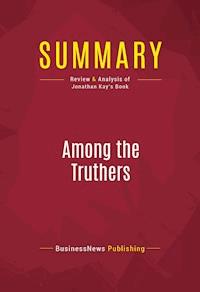 Summary: Among the Truthers ebook

The must-read summary of Jonathan Kay's book: "Among the Truthers: A Journey Through America's Growing Conspiracist Underground".This complete summary of "Among the Truthers" by Jonathan Kay, a Canadian journalist, explores the author's belief that conspiracy theorists are now at the centre of American politics. He argues that this phenomenon of deconstruction poses a significant threat, and that it must be replaced by rational and measured thinking. The book presents an examination of various conspiracy movements, from the 9/11 Truth movement to UFO obsessives and how they impact American society.Added-value of this summary:• Save time• Understand what contributes to the development of conspiracy theories• Expand your knowledge of American society and politicsTo learn more, read "Among the Truthers" and discover Kay's analysis of conspiracy theorists and the threat they pose to rational society.

Book Presentation: Among the Truthers by Jonathan Kay

One of the lesser publicized results of the terrorism attacks of 9/11 was America’s political center has sharply divided into two distinctly polarized ideological camps –one which believes strongly in conspiracy theories (the “Truthers”) and the other which sees the future of the United States as being bright as it is led by a brilliant visionary. In the past, such rifts have typically been healed by America’s intellectuals and political establishment through the use of consensus policies which throw a lifeline across the entire political spectrum but that isn’t happening today. Instead, identity politics is coming to the fore.

As a result, a wide and varied range of conspiracy theorists – who usually would be considered part of the lunatic fringe – have taken to center stage in American politics. The “Birthers” claimed President Obama was a foreign-born illegal alien who is dedicated to destroying the United States whereas the “Truthers” suggest the September 11 attacks were an inside job hatched by ultra-hawkish elements within the U.S. government and other shadowy players like arms dealers and oil companies who secretly pull the strings of elected officials to control society for their own aims. Many Truthers believe the Twin Towers were destroyed not by the hijacked airliners but by explosives secretly planted in the two buildings.

The Truther phenomena has become too important to ignore any longer. Truther theories have become threats to rational thinking across the nation’s intellectual landscape. It’s time to get to understand these theories and then replace them with rational and measured thinking.

Jonathan Kay is managing editor, columnist and blogger at Canada’s National Post newspaper. His articles have also appeared in The New Yorker, The New York Times, Reader’s Digest and Newsweek. He is a fellow at the Foundation for Defense of Democracies.

Summary of Among the Truthers (Jonathan Kay)

Part I – The Truth Movement – and its Ancestors

Human beings are predisposed to conspiracy theories – it’s an integral part of our DNA. From a very young age, children believe animals and the human race were made by someone (usually God) rather than the result of millions of years of evolution. Similarly, when something horrific happens in the world, our natural inclination is to try and figure out who masterminded this event. It’s easier and more natural to believe there is some kind of secret council calling the shots in the background than it is to accept that events can take on a life of their own. It’s not very inspiring to think the actors in some drama “got lucky” and managed to generate mayhem which far outweighed their much more modest original intentions.

Conspiracy theories have always existed in society. The Crusades and the Knights Templar were an early example of a conspiracy theory. A book called The Protocols of the Elders of Zion