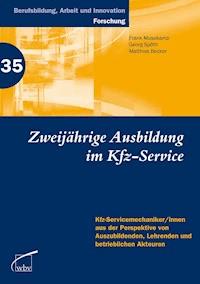 Since 2004 the two-year qualified profession "Kfz-Servicemechaniker" (vehicle service mechanic) has been accessible in Germany. Its introduction was disputed, but was also recognised as an opportunity for applicants with weak school-leaving qualifications. For this reason, the test period from 2005 to 2007 was observed scientifically. The profession is thus one of the most-studied qualified professions. Trainers, trainees and teachers were interviewed. The authors also present developments within the vehicle service branch and regarding the course of the training. The general debate of benefits and disadvantages of the two-year training allows for the results to be transferred to other fields of study.