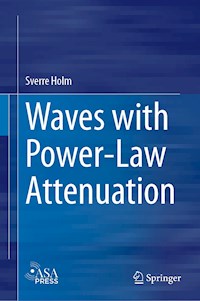 This book integrates concepts from physical acoustics with those from linear viscoelasticity and fractional linear viscoelasticity. Compressional waves and shear waves in applications such as medical ultrasound, elastography, and sediment acoustics often follow power law attenuation and dispersion laws that cannot be described with classical viscous and relaxation models. This is accompanied by temporal power laws rather than the temporal exponential responses of classical models.

The book starts by reformulating the classical models of acoustics in terms of standard models from linear elasticity. Then, non-classical loss models that follow power laws and which are expressed via convolution models and fractional derivatives are covered in depth. In addition, parallels are drawn to electromagnetic waves in complex dielectric media. The book also contains historical vignettes and important side notes about the validity of central questions. While addressed primarily to physicists and engineers working in the field of acoustics, this expert monograph will also be of interest to mathematicians, mathematical physicists, and geophysicists.