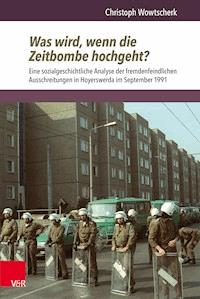 The town Hoyerswerda is – next to Rostock, Solingen and Mölln – a synonym for a xenophobically orientated violence wave in the early 1990s. Nevertheless, since today there has been no case study that explores the individual background of the cases.This volume highlights the riots that took place in Hoyerswerda in September of 1991 and lasted several days. These acts of violence are analyzed in the context of the social-historic development of the city since 1995. Between 1955 and 1989 the population of Hoyerswerda grew ten times its prior size due to attractive jobs in the lignite mining. Since the 1970s there were also foreign workers, especially from Algeria, Poland, Mozambique and Vietnam coming to live in the town. During the 1980s conflicts with the foreigners increased and the development of a movement of young right-wing extremists (Skinheads) took place.In the years of the transformation 1989 to 1991 numerous social conflicts raised, a lot of people lost their jobs and therefor became frightened of their future. In 1991 asylum seekers were brought to Hoyerswerda, a town with its already highly endangered social structure and setting. The social tension generated a aggressive climate and behavior towards strangers.