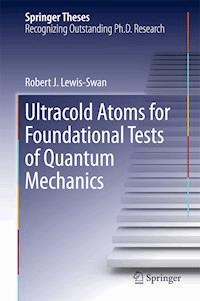 This thesis presents a theoretical investigation into the creation and exploitation of quantum correlations and entanglement among ultracold atoms. Specifically, it focuses on these non-classical effects in two contexts: (i) tests of local realism with massive particles, e.g., violations of a Bell inequality and the EPR paradox, and (ii) realization of quantum technology by exploitation of entanglement, for example quantum-enhanced metrology.
In particular, the work presented in this thesis emphasizes the possibility of demonstrating and characterizing entanglement in realistic experiments, beyond the simple “toy-models” often discussed in the literature. The importance and relevance of this thesis are reflected in a spate of recent publications regarding experimental demonstrations of the atomic Hong-Ou-Mandel effect, observation of EPR entanglement with massive particles and a demonstration of an atomic SU(1,1) interferometer. With a separate chapter on each of these systems, this thesis is at the forefront of current research in ultracold atomic physics.