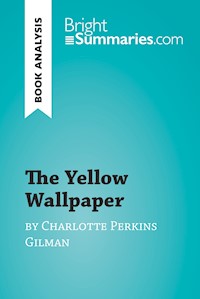 Unlock the more straightforward side of The Yellow Wallpaper with this concise and insightful summary and analysis!

This engaging summary presents an analysis of The Yellow Wallpaper by Charlotte Perkins Gilman, a haunting short story about a woman suffering from post-partum depression, whose doctor husband prescribes her a ‘rest cure’: she is to remain in the same room at the top of the house, to see no one, and to refrain from all reading, writing and thinking. However, as time goes by, with nothing to occupy her other than staring at the room’s ugly yellow wallpaper, the narrator starts to see a woman trapped within its endless pattern, and begins to wonder how she could set the woman in the wallpaper free… The Yellow Wallpaper was inspired by Charlotte Perkins Gilman’s own experiences of post-partum depression, and has come to be regarded as a classic of feminist literature.

Find out everything you need to know about The Yellow Wallpaper in a fraction of the time!

This in-depth and informative reading guide brings you:

Available in print and digital format, our publications are designed to accompany you on your reading journey. The clear and concise style makes for easy understanding, providing the perfect opportunity to improve your literary knowledge in no time.

Born in Hartford in 1860.Died in Pasadena in 1935.Notable works:Women and Economics: A Study of the Economic Relation Between Men and Women as a Factor in Social Evolution (1898), non-fictionHerland (1915), novelWith Her in Ourland (1916), novel

Charlotte Perkins Gilman was born in Connecticut and grew up in poverty after her father abandoned his family. She spent much of her childhood with her father’s aunts, including Harriet Beecher Stowe (American writer and social activist, 1811-1896), the author of Uncle Tom’s Cabin (1852). Gilman married Charles Walter Stetson in 1884 and had one daughter. Gilman suffered a serious case of post-partum depression, which was dismissed as a nervous or hysterical complaint by her husband and doctors. Gilman left her husband soon afterwards, although she did not obtain an official divorce until 1894. She embarked on a relationship with a woman named Adeline Knapp, which Gilman found far more fulfilling than her heterosexual marriage. Their relationship ultimately ended, and Gilman later found love with her cousin, Houghton Gilman.

Charlotte Perkins Gilman was a writer who was preoccupied with gender and its impact on the lives of women around her. Influenced by her experience of post-partum depression, Gilman commenced work on The Yellow Wallpaper in 1890. The dark account of mental captivity encapsulates the damaging effects of the lack of autonomy offered to women of Gilman’s generation. A feminist icon, Gilman’s unique grasp of gender and the structures it enforces ensure that her work remains relevant in the modern world.