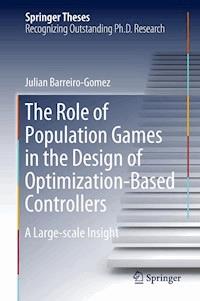 This book reports on the implementation of evolutionary-game theory in the design of distributed optimization-based controllers. First, it discusses how the classical population-game approach can contribute to and complement the design of optimization-based controllers. It shows how the features of this approach can be exploited to extend their capabilities in the solution of distributed optimization problems, and examines density games in order to consider multiple coupled constraints and preserve the non-centralized information requirements. Furthermore, it establishes a close relationship between the possible interactions among agents in a population with constrained information sharing among different local controllers. It also discusses coalitional games, focusing on the Shapley power index and proposes an alternative method of computing the latter, which reduces computational time, as well as a different way of finding it using distributed communication structures. All the proposed strategies are then tested on various control problems, such as those related to the Barcelona water supply network, multiple continuous stirred tank reactors, various unmanned aerial vehicle systems, and a water distribution system. This thesis, examined at the Universitat Politècnica de Catalunya and Universidad de los Andes in 2017, received the award for best thesis in control from the control group of the Spanish Committee of Automatic Control (CEA) in the same year.