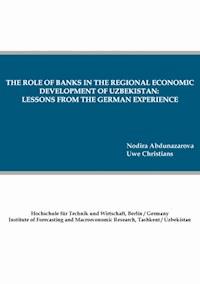 The role of banks in the regional economic development of Uzbekistan: lessons from the German experience ebook

This paper focuses on enhancing the banks’ contribution to the regional economic development of Uzbekistan. A case study approach was chosen for this purpose and policy recommendations have been based on the German experience. Currently, the banking sector in the Uzbek regions is mainly represented by the branches of large national banks. These branches are important providers of financial services for the population, small businesses, as well as strategic sectors. However, in order to reduce the default risks, local branches tend to offer credit to safe borrowers in more prosperous regions. This unequal access to financial services increases regional disparities and worsens performance of enterprises in less developed regions. Since the German regional banks are actively involved in the local economic processes, this experience may offer important solutions to the problem in Uzbekistan. The findings support the recommendations for stimulating various financial institutions, namely a Development Fund, a Guarantee Fund, and private cooperative banks in regions of Uzbekistan.

The aim of this study is to investigate ways on strengthening the role of banks in Uzbekistan's regional economic development. The proposals have been based on the experience of Germany – a country whose financial system is commonly referred to as one of the most regionally oriented. However, a major problem with this kind of application is a gap between these countries' levels of financial development. Uzbekistan does not have such a long and successful tradition of a market based financial system as Germany has. Uzbek banks still need to develop credit technologies, improve corporate governance, as well as strengthen a reputation among their clients. In implementing these overall system reforms it is important to take into account the specifics of bank activities in local areas. So far, however, there has been little discussion about the regional aspects of Uzbek banking system. In this regard, the well-studied Germany's case reveals some important lessons and prerequisites for creating a framework that would support the locally-oriented banks in Uzbekistan.

The German decentralized and not purely laissez-faire banking system is a unique example how various public as well as private regional banks can successfully contribute to economic development of less developed regions and be strong competitors with large joint-stock banks. On the other side of the spectrum there is a country, namely Uzbekistan, with a dominance of state-owned bank branches outside the capital city. These branches often do not have enough information about borrowers in peripheral regions and tend to provide credit to safe customers with sufficient collateral. This leads to an increase of regional disparities in the levels of lending and financial service development. As a result, it may nullify policy efforts to encourage banks to become an important source of investment and hence, economic growth. Currently, Uzbekistan needs a roadmap to involve banks in the regional economic processes and to enhance performance of regional banks.

This paper is organized as follows. Section 1 describes the main features of Uzbekistan's economy and banking system. In this section, regional aspects of the Uzbek banks' performance are also considered. Section 2 provides the main characteristics of the German three-pillar banking system, namely: large private banks, savings banks, and cooperative banks. We focus on the policies and business strategies that these banks carry out in the German regions. Sections 3 and 4 present the German guarantee banks and development banks which help to overcome credit rationing, lack of collateral, as well as the short-termism of commercial credit. Section 5 concludes the paper and offers some policy recommendations for the future reforms in Uzbekistan.

Ultimately, despite the differences in the two countries' development, this paper supports the recommendations based on the German experience for stimulating various local financial institutions, namely cooperative banks, a Development Fund and a Guarantee Fund which help to increase the level of competition, overcome asymmetric information with respect to borrowers, and stimulate regional economic growth in Uzbekistan.

First, let us consider the basic facts about Uzbekistan's economy and banking system during the period of 2007-2012. Uzbekistan had GDP growth of over 8% since 2007 and the CPI inflation rate was around 7% (Table 1). Although about 50% of the population lives in rural communities, currently the percentage of agriculture in the country's GDP is less than 20%, the percentage of the industrial sector together with building, transportation and communication made up 40% of the GDP (the State Committee on Statistics of Uzbekistan, 2013). It is worth noting that in 2012 the share of small businesses in the country's GDP made up more than 54%.

Source: the State Committee on Statistics and Central Bank of the Republic of Uzbekistan, IMF

In the post crisis period, Uzbekistan experienced growth due to reforms in the industrial sectors and the relatively high prices for resources - main export earners (gold, copper, gas, etc). Uzbekistan is the world's largest producer of cotton and holds the second position for its exports.

The financial system of Uzbekistan didn't have serious drawbacks from the global economic crisis, primarily due to its relative low exposure to the international financial markets.

Source: The Central Bank of the Republic of Uzbekistan.

The banking system relies more on internal resources, as reported by the Central bank of Uzbekistan, at the end of 2012 the share of loans from domestic sources in the banks' total loan portfolio made up to 85.8%. External borrowings were used mainly for the long-term lending for investment projects on modernization of strategic sectors and supporting small businesses.

All Uzbek commercial banks received a "stable" rating from the international rating agencies such as Moody's, Standard and Poor's, and Fitch. In 2012, the banking system's capital adequacy ratio of about 24.3% remained high by international standards and the level of non-performing loans was relatively low (IMF, 2013).

The Central bank declares about 3 of the biggest state-owned banks (National bank for foreign economic activity of the Republic of Uzbekistan, Xalq Bank (People's bank), and Asaka bank, but other banks also have the government's share in their equity (Table 3). Uzbek's large state-owned banks finance long-term strategic projects in communication, transportation, and the building industry, among others.

Source: The Central Bank of the Republic of Uzbekistan. Information about the main shareholders was taken from the banks' official websites.

It is worth noting that the German regional savings banks promote their experience in similar financial institutions in developing and in transition countries. The Savings Banks Foundation for International Cooperation (SBFIC) had several financial projects in Uzbekistan, aiming to improve people's living conditions by enhancing their capacity to save money, countrywide lending to small and start-up businesses, introducing micro-insurance services, and training for bank assistants. The main partner of the German savings banks' group in Uzbekistan is Xalq Bank which has the largest branch network in the country. During the period 2003-2008 the SBFIC had supported the reformulation of Xalq Bank's business strategy towards retail banking. The project was composed of an introduction of risk (mainly credit) management, a development of new products, and an improvement of branch network performance (SBFIC, 2008).

Xalq Bank is the oldest financial institution in Uzbekistan, which was opened in 1875 in Tashkent city. By 1896 its branches operated in other Uzbek cities, accumulated deposits and provided letters of credit and government securities. During the Soviet period, it was the state-owned bank called "Uzsberbank" (Uzbek Saving Bank). After the dissolution of the Soviet Union, Uzsberbank was transformed into the state-owned Xalq Bank on October 4, 1995. It is important to mention that at the beginning of 1994, 98.5% of the total savings in Uzbekistan was accumulated by Xalq Bank (Uzbank.net, 2011). It is also worth noting that the pensions of all retired Uzbekistan citizens are accumulated on their accounts at Xalq Bank. Also, the bank is the financial agent of the government in targeted assistance to low-income families and benefits for children (children's allowances).

There are other large banks which aim to develop strategic sectors in the Uzbek regions. For example, Qishloq Qurilish Bank focuses on long-term mortgage lending, especially in rural areas. Agro Bank provides financial services to agricultural enterprises and farm households.

During the last decade the government has introduced several strategic programs on reformation and liberalization of the banking system. The last program for the period 2011-2015 has composed complex measures on further improving the stability of the commercial banks and achieving high international standards. The central and local authorities together with commercial banks are responsible for fulfilling the main goals of this program (Decree of the President of Uzbekistan #1438, 2010).

In 2008 the Decree of the President of Uzbekistan "On measures to further raise the financial stability of the enterprises of the real sector of economy" was accepted for the purpose of financial recovery of insolvent enterprises during the global financial crisis. As a result, till 2013 the large Uzbek banks accepted 171 bankrupt enterprises to their balance (Uzdaily.uz, 2013). The main part of these enterprises was companies with debts and with the value of less than US $2 million. For managing the assets of these enterprises the banks established management companies or specialized sub-divisions. The banks have invested over 442,6 billion soums of their own resources ((approximately US $200 million) official currency rate on 14.10.2013 1$=2158.36 soums). The Central Bank declared that as a result of the banks' investments, 156 enterprises rehabilitated their activities and created over 25,000 new jobs. Currently, 122 enterprises were realized to investors. One can claim that these measures to rescue bankrupt enterprises were important for financial stability in the real sector. On the other hand, the administrative order on the acceptance of insolvent enterprises to the state-owned banks' balances could be a challenge for the Uzbek banking system during the global financial crisis.

Due to a lack of data, we cannot analyze the distribution of credit among the sectors from 2007 to 2013. However, the available data shows that in 2011 more than 40% of the total bank credit was concentrated in the industrial sector (Graph 1). Stimulation of this sector is one of the main priorities of the current economic policy. The Uzbek large banks finance the long-term strategic projects in such areas as chemical, electric power, and the automobile industry, among others.