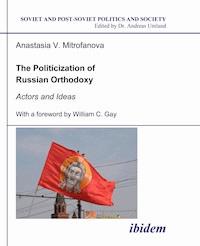 The Politicization of Russian Orthodoxy ebook

This book analyzes the ideologies of politicized Orthodox Christianity in today Russia including fundamentalism, pan-Slavism, neo-Eurasianism, Orthodox communism and nationalism. Apart from textual analysis, the volume provides a description of the specific subculture of political Orthodoxy, i.e. its language, symbols, art, mass media, hangouts and dresscode. This study represents the first scholarly examination of these topics. Unlike other publications on the politicization of Orthodoxy, it is focused not on the political ambitions of the Russian Orthodox Church (ROC), but on political movements ideologically based on their own interpretations of the Orthodox doctrine, often contravening the canonical version. The book demonstrates that the “political Orthodox” or “Orthodox patriots” are a specific branch of believers who frequently do not practice Orthodoxy properly, inventing, instead, their own quasi-Orthodox rituals. The volume shows that the ROC is not responsible for such religious politicization and that the community of the political Orthodox is rather guided by religiously oriented lay intellectuals. The book provides a brief analysis of this intellectual community. Finally, the volume demonstrates that, even in the absence of significant electoral achievements, some religio-political Orthodox movements—namely, fundamentalists and nationalists—have been able to gain public support at the grassroots level. They have been able to infiltrate larger and more moderate political organizations thus contributing to a general “Orthodoxization” of Russian political discourse.