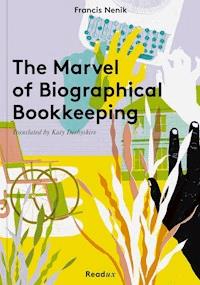 The Marvel of Biographical Bookkeeping ebook

Nicholas Moore and Ivan Blatný were 20th-century poets whose stars burned bright in their youths, Moore in England and Blatný in Czechoslovakia. Then both men were battered by history and individual fate. The Marvel of Biographical Bookkeeping is a formally innovative book that explores their life stories. Its wildly imaginative structures are built on meticulous research, and as the two men's separate, parallel existences unfold, they reveal astounding coincidences and heartbreaking reversals of fortune.

The Marvel of Biographical Bookkeeping

Translated from the German by Katy Derbyshire

For Ivan Blatný and Nicholas Moore, who took new liberties after being robbed of their own.

When the critic George Steiner looked through the entries for the Sunday Times Baudelaire translation competition he was judging in 1968, he was no doubt a little surprised. Someone had submitted more than thirty versions of the same poem.

When the journalist Jürgen Serke came across a slim man with a small cut on his freshly shaven cheek in St. Clements Hospital in Ipswich in 1981, he was no doubt a little surprised. The man had been declared dead more than thirty years previously.

That someone was Nicholas Moore, an aspiring English poet during the 1940s, who had somehow disappeared from the radar at the end of that decade and had not made a reappearance since.

That man was Ivan Blatný, an aspiring Czech poet during the 1940s, who had absconded from his delegation on a trip to London in 1948, stayed in London and then disappeared.

That is, Nicholas Moore had never really disappeared; instead he had slipped unnoticed into the workings of time and, in addition, had suffered a series of blows of fate, all of which he had somehow survived. Yet in the world of letters, Nicholas Moore was a dead man, catapulted out of a literary machinery revolving ever faster, and often merely around itself.

That is, Ivan Blatný had never really disappeared; instead he was struggling with paranoia as a result of his escape and exile, which took him behind the secure walls of various English hospitals. Yet in the world of letters, Ivan Blatný was a dead man, his name erased by a literary machinery surviving on suppression and silencing.

Nicholas Moore, a twenty-nine-year-old author of numerous poetry collections, editor of diverse magazines and anthologies and the recipient of respected literary prizes – Nicholas Moore, a frequent and welcome guest in the paper worlds of Anglo-American poetry, leading an almost secure life in comparison to other poets – Nicholas Moore, who dedicated a large part of his poetry to his wife Priscilla and even named a book after her – Nicholas Moore is abandoned: by his wife, by financial independence, and by the good fortune of being printed and read.

The only person, it seems, to take an interest in Nicholas Moore thenceforth is the man who steals his wallet in the crush at London’s Petticoat Lane market: containing not so much money as letters of inestimable value – letters that Moore had exchanged over the years with the American poet Wallace Stevens and the British writer Osbert Sitwell.

The only person, it seems, to take an interest in Ivan Blatný thenceforth is an agent from the Czechoslovakian secret service, whom someone has charged with tempting the poet back for propaganda purposes. A hopeless undertaking. Blatný, the spy reports, has come to terms with his new life in hospital and lost all contact to the outside world.

All that remains is lonely, wasted land. Everywhere around him. Not only has Priscilla left, but she has also taken their daughter with her, and Moore has to give up the flat where the three of them previously lived. He finds a new place to live (where he stays for the rest of his life): a small ground-floor flat in a desolate part of southeast London.

All that remains is dead, unfamiliar land. Everywhere around him. Not only has Blatný gone into exile, but he has also found no new home here and soon, mentally defeated, has to surrender his new-found freedom again. He finds a new place to live (where he stays for the rest of his life): a series of psychiatric hospitals, the first of which – Claybury – is in the northeast of London.

Nor do things look any better from a financial perspective. Money, the lack of which grants writing full authenticity in the mind of many a critic but leaves nothing more than a hole in the writer’s stomach, is now more than just tight; the time of parental subsidies is over and Moore’s income from his poetic undertakings is so small that he is forced to exchange writing poetry for gardening and take on a job with a London seed merchant.

Nor do things look any better from a literary perspective. The road from genius to insanity, which onlookers often consider to be predetermined in a writer’s innermost workings, is for Ivan Blatný one determined by distant, unfamiliar powers. And even if that’s not the case and for him, having suffered from anxiety during the war, the road from lyricist to lunatic is only a fork in the path inside his skull, London is still a thousand miles away from Brno.

By the time Moore’s poetry volume Recollections of the Gala is published in 1950, interest is minor and the critique is devastating. Nicholas Moore, the journals write, is a jaded man after an insipid entertainment, his poems a lukewarm rehash of a time so very tepid by now. Shortly after that, Nicholas Moore disappears from the literary world.