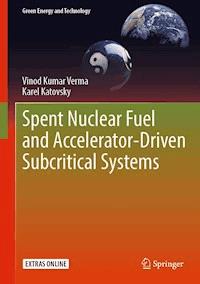 This book offers a comprehensive overview of the reprocessing of spent nuclear fuels, and discusses the applications of radiation, particularly spallation neutrons and gamma rays. The unspent nuclear fuel of a reactor amounts to roughly 95 per cent of the loaded fuel. It contains both fertile and fissile fuels, minor and higher actinides and radioactive fission products. In 2015, out of approximately 4 million metric tons of spent fuel, only 90,000 metric tons was reprocessed worldwide; the rest was either sent to repositories, kept for cooling down, or put on a waiting list for future reprocessing. With regard to the direct  reutilization of spent nuclear fuel, the new technique of ‘Energy Amplifiers’ has attracted considerable attention among the nuclear energy community.  Presenting extensive information on this technique, the book is divided into eight major sections: (i) spent nuclear fuel and alternative transmutation methods, (ii) general concept of accelerator-driven subcritical systems (ADSS), (iii) spallation neutron sources and the possibility of incineration, (iv) requirements for nuclear data, (v) transmutation of spent nuclear fuel and extension of the fuel cycle, (vi) spallation neutron production facilities, (vii) major experimental facilities for ADSS, and (viii) software tools for the design and modelling of ADSS. The book is ideally suited as a textbook for graduate students as well as a reference guide for researchers and practitioners.