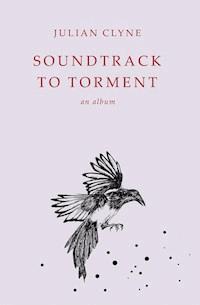 "The next thing that penetrates my perception is the blue sky above the clouds. Perfect, untainted azure, as if everything was alright, as if nothing could ever break the peace, as if they right in saying that, up here, the sun always shines. But it's just an illusion. For I'm flying East, into the night, and up here the night is even darker." Purest silence, the underwater world, travels to distant lands, mirrors: they are both escape and revelation for these characters who go through loss and existential crises, who feel love and loneliness in the city, who seek beauty in the minute as time is slowed down to just one moment. All the protagonists might just be various facets of one and the same. For at the heart of this album of possibly interrelated short stories and prose poems stands the question: “Of all myselves, which is my self?” and attempts at finding an answer.

Produced by Trilby and Quill Editions.

Julian Clyne is hereby identified as author of these words in accordance with the Copyright, Designs and Patents Act.

No part of this publication may be reproduced, stored in a retrieval system, or transmitted in any form or by any means without the prior written permission of the author.

For those who are still able to dream.

And for those who wish they still could.

For those who have understood.

And for those who will redeem.

It feels strange that all this should begin with good-bye.

Oh! “Sticks and stones may break my bones but your words – now they really hurt!”What a poetic stab in the ribs you gave me…

Your soft voice rings in my ears:Delicious soundtrack to my torment.

Left to create realities,I get high and listen to Miles.Parentheses, helium balloons, Cubes in tumblers, smileys on pills:Little compartments filled with possibility;The potential… to replace … to help meEscape from the confines of the netherworld.Conjure dreams. Dreams! But of what? For what?

Naomi’s face at the airport. I’m embarking on a journey across a continent and an ocean. It is a race against time. Yet I have no power to go faster, it is entirely out of my hands. It is unbearable: I can only watch in agony as the hourglass empties itself, grain after grain, and I know that this time there won’t be anyone to flip it around.

Naomi’s face at the airport. Her eyes, her beautiful blue-grey eyes, the colour of the Pacific on a bright sunbathed day. She’s fighting hard not to cry, and I thank her for it. To see her tears would tip me over the edge, too. She wants me to know she’ll always be there for me. And right then, she is my only glitter of hope. For a brief instant, with her hand strongly squeezing my hand, I don’t feel the pain. For an instant the oppressive fear disappears which has been growing ever since I heard about my sister’s accident. Naomi and I don’t speak. Words are useless at this point. Her presence is more than I could have prayed for. Before I head towards the security check, she leans in, forces a faint smile, and kisses me. She whispers in my ear, “I love you.” It’s the first time she said it, it’s the first time either one of us said it. I can’t return it, I can only hug her even more strongly. I leave her, hold on to her hand as long as possible, but I have to let her go. “I’m right behind you,” I hear her shout, but I’m scared that we will never again meet as the people we are now.

Naomi’s face at the airport. The vision lingers in my mind. I need to hold on to it, to treasure it, to cherish it. It will no doubt become a crutch for me to lean on. The next thing that penetrates my perception is the blue sky above the clouds. Perfect, untainted azure, as if everything was alright, as if nothing could ever break the peace, as if they were right in saying that, up here, the sun always shines. But it’s just an illusion. For I’m flying East, into the night, and up here the night is even darker.

Naomi’s face at the airport. She’s all I see, even though I try to remember my sister, try to conjure images from a happy past. But instead of memories, there are premonitions of horror. My vivid imagination becomes a curse. I start to see an ICU, tubes dangling and machines beeping. I start to see a crematorium. I start to see my parents, devastated. Then, as if my mind entered a mode of self-defence, Naomi’s face at the airport always returns, stops me from going deeper into the darkness. Tears run down my cheeks and the lady next to me asks if I’m all right. I don’t answer. I’m sorry, too; she seems nice. What use to me are the words of a stranger now? Instead I look out the tiny window and hope the sunset behind us will appease me. The clouds are the colour of blood.

Joe’s face at the airport as he picks me up. Words are useless, his expression says it all. I’m too late.

His sigh was filled with exhaustion, pain and disgust. He had just stepped out of the office. Routine. Day in, day out: pub, pint, empty banter, pint, empty noise, pint, tube, pint, empty bed. Sometimes the bed was shared, always it felt empty.

And now rain! But today he felt the need to walk, not home, not anywhere –– just to walk in the rain.

He delighted in getting drenched and watched with glee as everyone else was visibly annoyed by the downpour. The gush of rain was not, by then, surprising. Yet, to many it had come at the worst time: the 5 o’clock rush. Some people chose to stand under awnings or marquees or any kind of shelter they could find. Others ran to the nearest tube station covering their heads with document cases or overcoats. Still others sought refuge in coffee shops, bars or boutiques. There were also the pessimists, who, despite the sun’s early morning promises, had taken their umbrellas “just in case” and now strutted along on the sidewalks.

He, on the other hand, simply sauntered and slowly he drifted off, forgetting all the little things that annoyed him, forgetting the tedium in his life. Each cold drop made him happier and happier, for with every single drop the inevitably subsequent sunshine and blue skies came closer. The fleeting nature of the rain made it all the more enjoyable.

As if for the first time, he saw the familiar buildings in a grim and grey light and was surprised at how different it made them look: mystical, majestic, awesome. It was like pacing through a cubist art gallery, the mind attentive only to the play of light and colour, out of which a new shape emerged. The eyes alone were active; the other senses became superfluous.

A mild shock, due more to surprise than pain, tore him out of his trance and, instinctively, he grabbed her by the hand to make sure she’d keep her balance. It took a moment for him to regain control over his own senses. First he felt the cold drops hit his skin, on which goose bumps quickly rose; then he heard the cacophony of voices and passing cars, horns and sirens, only half drowned-out by the patter of rain; then he caught a whiff of her subtle fragrance; finally he saw her face. Her thin lips, slightly accentuated by a pale shade of red, were open just a little to reveal her teeth in the hint of a smile. Her pixie nose guided his gaze to her greenish-blue eyes. Her dark, boyish hair was sticking, drenched, to her forehead and temples; he could only guess that it was naturally curly.

He was stunned, as if stupefied by the girl who materialised in front of him. Only now did he realise that he was still holding her wrist. She did not say a word either.

“Sorry,” he stammered, unwittingly and rather foolishly because it felt to him like an eternity had passed since they had collided.

She smiled in response and, after a pause that he left unused, she made to leave, slipping slowly past him.

“Wuddyaliketjoin-me-for-coffee?” The words spilt out of his mouth as her back was already turned to him. He regretted speaking so fast and without confidence; in fact he was not sure if the sounds had been words at all. Yet, he had felt compelled to get to know her, to bask just a bit longer in the warmth she made him feel.

She was visibly hesitant but she no longer made any signs of leaving. He continued in an attempt to explain, “Sorry, it’s just… I’m dying for an espresso, you see, and I would much rather have it with you than by myself.”

For the first time since they had met, she spoke. Her voice was melodious and quiet, comforting yet commanding full attention.

“I know just the place,” she whispered and gave his arm a gentle stroke so as to initiate the walk.