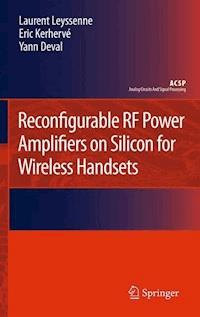 Reconfigurable RF Power Amplifiers on Silicon for Wireless Handsets is intended to designers and researchers who have to tackle the efficiency/linearity trade-off in modern RF transmitters so as to extend their battery lifetime. High data rate 3G/4G standards feature broad channel bandwidths, high dynamic range and critical envelope variations which generally forces the power amplifier (PA) to operate in a low efficiency “backed-off” regime. Classic efficiency enhancement techniques such as Envelope Elimination and Restoration reveal to be little compliant with handset-dedicated PA implementation due to their channel-bandwidth-limited behavior and their increased die area consumption and/or bill-of-material. The architectural advances that are proposed in this book circumvent these issues since they put the stress on low die-area /low power-consumption control circuitry. The advantages of silicon over III/V technologies are highlighted by several analogue signal processing techniques that can be implemented on-chip with a power amplifier. System-level and transistor-level simulations are combined to illustrate the principles of the proposed power adaptive solutions. Measurement on BICMOS demonstrators allows validating the functionality of dynamic linearity/efficiency management. In Reconfigurable RF Power Amplifiers on Silicon for Wireless Handsets, PA designers will find a review of technologies, architectures and theoretical formalisms (Volterra series…) that are traditionally related to PA design. Specific issues that one encounters in power amplifiers (such as thermal / memory effects, stability, VSWR sensitivity…) and the way of overcoming them are also extensively considered throughout this book.