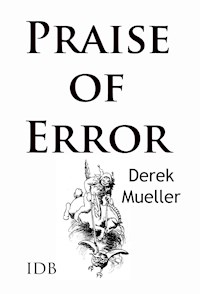 Many people know that Columbus wouldn't have dared to sail across the Atlantic if he had been aware how far the way to Asia really is. But there exist a lot more errors which turned out to be useful. Great thinkers like Copernicus and Einstein, but also ordinary people made mistakes which changed our world in many ways. A collection of the most interesting and useful errors in history, science, kitchen and art. Contents: Errors – always negative? To err as a program? Trial and error or: What geniuses and rainworms have in common Mistakes? How delicious! – Potato crisps and cauliflower The great fried potatoes failure Tofu, cheese, wine & Co. Cauliflower and beyond In wine there is error Copernicus or: a rounder rounding … and Kepler Discovering America with Aristotle El Dorado: the mirage of greed Dreams, lies and literature: Schliemann Creative misunderstandings in literature Kandinsky or: The right wrong view Only relatively right assumptions: theory of relativity Unsuccessful, but still a masterpiece: the Michelson–Morley experiment A bit of theory on error Sloppiness saves the lives of millions Can false prophecies be useful?

To err as a program? Trial and error or: what geniuses and earthworms have in common8

In wine there is error24

Copernicus or: a rounder rounding.26

El Dorado: the mirage of greed.45

Kandinsky or: The right wrong view..65

Unsuccessful, but still a masterpiece: the Michelson–Morley experiment74

A bit of theory on error77

Sloppiness saves the lives of millions.79

Can false prophecies be useful?.88

To err is human – a truism.

To err is useful – what’s that supposed to mean?

The first sentence, a Roman saying, is obviously true. The second one fits only sometimes. Nevertheless, it contains more truth than one might think at first sight. It is the core of this book: You will hear about rainworms straying in the soil, about conquerors straying in the rainforest, about scientists straying in the jungle of theories.       Not all of them will find their goal, some of them not even know for sure what they are looking for. But they all have something in common: In the very end, there will be some use for someone – not always for the straying person, often for certain groups, sometimes for humankind as a whole.

Truth has been praised often enough. It is about time to laud errors, too. In contrast to Erasmus of Rotterdam’s famous „In Praise of Folly“, I don’t mean this ironically in the first place.

I’m not the first one to stroll on this strange ground. A few years ago, the German philosopher JürgenMittelstraßpublished a paper called „The perks of errorinscience“. To him I owe several examples. I wanted to offer an introduction to this topic which is easy to read for as many people as possible. And I wanted to show that there are many places, often far away from science, where you can find productive errors and misunderstandings.

This book doesn’t stick to a strict chronological order, neither there is an underlying traditional system of fields of study. You will find a mix of easy and complicated topics, with some principal thoughts added. Sometimes we even step back from a later to an earlier idea.           This happens on purpose. It’s a journey through the jungle of knowledge and creative non-knowledge. Error shall be our compass, its many consequences our map.

The smooth black balls sparkled seductively. The exhausted leader Hork took a closer look at the dark, shining fruits on the rank bush. For days, he and his clan hat eaten only shrivelled roots on their way to new hunting grounds. But now: a feast! He called his family and started to eat.

His wife Ondu hesitated, though. There was something creepy about thins unknown fruit – so shiny and so dark at the same time, as if bewitched by spirits … and these five petals around each fruit, like claws clutching at anyone attempting to steal the plant’s lustre …

A short time later, Hork was winding in febrile convulsions, fantasizing about monsters and demons tracking him. He lapsed into a coma. He didn’t wake up again.

The dose of alkaloids in the belladonna fruits had been lethal. But his family should live – maybe they belong to our ancestors.                 There are mistakes whose effects are entirely negative for those who’ve made them: for example, to eat a lethally poisonous plant, in particular in a time without modern medicine.                                     However, for the bereaved, the unsuccessful meal wasn’t completely negative: On one hand, they lose a relative, maybe an important one. On the other hand, they will be immune against making the same mistake – provided the poison takes its effects fast enough to be allocated properly. Slow, insidious poisonings can remain undetected for centuries: For example, the ancient Romans used to “refine” their wine with lead acetate, a chemical also known as “lead sugar” because of its taste. The poison took its lethal effect so slowly that people didn’t recognize it. Centuries later, the wine-loving composer Ludwig van Beethoven probably died because of chronic lead sugar intoxication.

We have to bear in mind that our present, extensive knowledge on medicine is based to a great part on the often lethally negative experiences our ancestors made. On the other hand, generations to come will probably profit of quite a number of blunders we’re making at present – provided that they stay adaptive.                         These errors are useful for others: fine (for them). Humans profit here of their unique capability to pass cultural knowledge over many generations. Nature, however, has similar techniques. We will hear more about this later on.                                                                         Maybe you’ve noticed: In a certain sense, Hork’s story contains another error, even a double mistake, but one which is useful for the person making it. Hork’s wife erroneously believes that  it’s possible to conclude from colors and forms of nature to spirits and demons – and, without further examination, to forecast dangers on this basis. In this single case, Ondu was right. So this error is useful because it saves her and her children’s lives. But if Ondu – or her clan – should believe that she’s a clairvoyant, this may lead to lethal mistakes on other occasions.

There should be a sufficient share of correct predictions in relation to their total number. Nowadays, we expect the weather forecast to be right at least for the next day, and mostly, we won’t be disappointed. Meteorologists who fail only once will have quite a bad day. With stock exchange gurus, we seem to be much more liberal: Often enough, they only have to “predict” (i. e., to guess luckily) a crash, and greedy investors will believe every word they say …

To err as a program? Trial and error or: what geniuses andearthworms have in common

Back in 1881, someone published in London a book with the beautiful title The formation of vegetable mould through the action of worms. The author: Charles Darwin, at that time already famous all over the world for his decisive contributions to the theory of evolution. The essay on worms happened to become Darwin’s last work. Was it due to a fine British sense of humour that the white-bearded old man turned his mind towards an entirely non-spectacular, low species like the local earthworm? That he credited them – properly –  great use for agriculture and therefore the survival of mankind?

In any case, Darwin probably didn’t know that rainworms possess a quality which for a very long time had been assigned only to humans and few other, “higher” species: They are adaptive.

The American psychologist and zoologist Robert Yerkes carried out an experiment with earthworms: He let them creep through a T-shaped tube from the lower end to the crotch. If they turned left, the deplorable worms had to creep over sandpaper, and then they received a light electric shock. If they turned right, they could reach the goal without obstacles. In the beginning, the worms turned randomly to either side. After some twenty or hundred repetitions, the worms learned that they had to turn right in order to avoid the uncomfortable treatment on the other side.

This behavior is known in ethology as “trial and error”. The nervous system of the earthworm is sophisticated enough for this adaptive task.

Generally speaking, higher developed species can do so, too. Even higher, one should say, for the rainworm belongs to the large group of underrated animals.

In this regard, the worm behaves quite similar to the Stone Age man who sooner or later would recognize that certain roots give him a diarrhea – or similar to modern people noticing after lots of new taxes that they maybe voted the wrong party into power. Or similar to a scientist who, after many failed experiments, invents a radically new theory. If he is successful enough in formulating this theory, he may win the Nobel prize. This can happen even if the new theory is based partially on wrong assumptions. We will deal with this in several chapters, among them the one on the theory of relativity.

For any kind of learning from mistakes you could say: The rainworms have shown us what to do – let’s try to equal them …

Maybe in no other room as many mistakes are made as in a kitchen. So many opportunities to blunder! Incorrectly measured ingredients, temperature too high or too low, wrong kind of fat, yeast suffocated in salt, a little phone call in between …

It may have disastrous consequences if dutiful cooks try to care about “healthy” food and to produce something eatable, or even tasty, at the same time. Should this balancing act work (with a good deal of trouble), some years later disappointment may follow: For example, you happen to hear that the kind of oil you’ve been using all the time in contrast to your own taste in fact is not half as healthy as so-called experts told you on almost every channel on TV.

Considering all these blunders and gaffes, isn’t it consoling that there are some really useful errors in the culinary sector, too – maybe more than proud chefs like to admit?

The history of the invention of potato chips is passed on in two different versions.