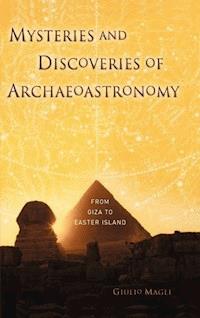 Mysteries and Discoveries of Archaeoastronomy ebook

The book is divided into two parts. In the first, the reader is taken on an ideal ‘world tour’ of many wonderful and enigmatic places in almost every continent, in search of traces of astronomical knowledge and lore of the sky. In the second part, Giulio Magli uses the elements presented in the tour to show that the fundamental idea which led to the construction of the astronomically-related giant monuments was the foundation of power, a foundation which was exploited by ‘replicating’ the sky. A possible interpretive model then emerges that is founded on the relationship the ancients had with “nature”, in the sense of everything that surrounded them, the cosmos. The numerous monumental astronomically aligned structures of the past then become interpretable as acts of will, expressions of power on the part of those who held it; the will to replicate the heavenly plane here on earth and to build sacred landscapes.

Finally, having formulated his hypothesis, Professor Magli returns to visit one specific place in detail, searching for proof. This in-depth examination studies the most compelling, the most intensively studied, the most famous and, until recently, the most misunderstood sacred landscape on the planet - Giza, in Egypt. The archaeoastronomical analysis of the orientation of the Giza pyramids leads to the hypothesis that the pyramids of Cheops and Chephren belong to the same construction project.