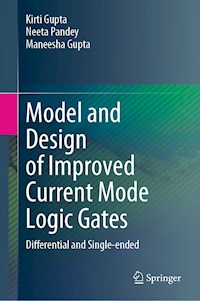 Electronic system implementation involves embedding digital and analog circuits on a single die shifting towards mixed-mode circuit design. The high-resolution, low-power and low-voltage analog circuits are combined with high-frequency complex digital circuits, and the conventional static CMOS logic generates large current spikes during the switching (also referred to as digital switching noise), which degrade the resolution of the sensitive analog circuits via supply line and substrate coupling. This problem is exacerbated further with scaling down of CMOS technology due to higher integration levels and operating frequencies. In the literature, several methods are described to reduce the propagation of the digital switching noise. However, in high-resolution applications, these methods are not sufficient. The conventional CMOS static logic is no longer an effective solution, and therefore an alternative with reduced current spikes or that draws a constant supply current must be selected. The current mode logic (CML) topology, with its unique property of requiring constant supply current, is a promising alternative to the conventional CMOS static logic.