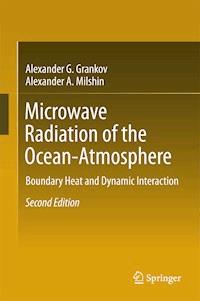 Microwave Radiation of the Ocean-Atmosphere ebook

The book describes different approaches to the analysis of heat and dynamic processes in the ocean-atmospheric interface with satellite passive radiometric observations at microwaves. It examines the feasibility of determining synoptic, seasonal and year-to-year variations of sensible, latent and momentum fluxes to a useful accuracy using the DMSP SSM/I and EOS Aqua AMSR-E data directly from the measured brightness temperatures.
An important object in the studies is the North Atlantic with emphasize on the areas with high midlatitude cyclon activity: here the main results have been obtained by combining data from the vessel experiments NEWFOUEX-88, ATLANTEX-90 and the data of microwave radiometers from the DMSP and EOS Aqua satellites.
The role of vertical turbulent and horizontal advective heat transfer in forming interrelations between the brightness temperature of the system ocean-atmosphere and surface heat fluxes in the range of synoptic time scales is analyzed.
Special sections of the book describe some results of analysis of reaction of the system ocean-atmosphere on passing of the tropical cyclone Katrina (August 2005) in the Florida Strait as well as a behavior of the system in the period of a time preceding to origination the cyclone Humberto (September 2007) in the Mexico Gulf. The long-term goal of this research is the search for effects and regularities, which can explain the reasons for the tropical cyclones appearance. Some characteristics of the tropical cyclones (brightness temperature and heat contrasts, etc.) are compared with those for midlatitude cyclones.
At the same time as covering a key topic area with implications for global warming research, this text is also usefull to students who want to gain insight into application of satellite microwave radiometric methods for studying the air-sea interaction.
Key themes: microwave radiometry, air-sea interaction, midlatitude and tropical cyclones, atmosphere boundary layer, heat and momentum surface fluxes.