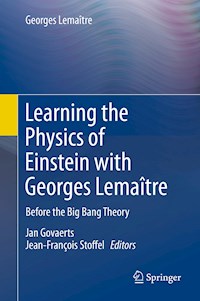 Learning the Physics of Einstein with Georges Lemaître ebook

This book presents the first English translation of the original French treatise “La Physique d’Einstein”  written by the young Georges Lemaître in 1922, only six years after the publication of Albert Einstein’s theory of General Relativity. It includes an historical introduction and a critical edition of the original treatise in French supplemented by the author’s own later additions and corrections.

Monsignor Georges Lemaître can be considered the founder of the “Big Bang Theory” and a visionary architect of modern Cosmology. The scientific community is only beginning to grasp the full extent of the legacy of this towering figure of 20th century physics. Against the best advice of the greatest names of his time, the young Lemaître was convinced, solely through the study of Einstein’s theory of General Relativity, that space and time must have had a beginning with a tremendous “Big Bang” from a “quantum primeval atom” resulting in an ever-expanding Universe with a positive cosmological constant.

But how did the young Lemaître, essentially on his own, come to grips with the physics of Einstein? A year before his ordination as a diocesan priest, he submitted the audacious treatise, published in this book, that was to earn him Fellowships to study at Cambridge, MIT and Harvard, and launched him on a scientific path of ground-breaking discoveries. Almost a century after Lemaître’s seminal publications of 1927 and 1931, this highly pedagogical treatise is still of timely interest to young minds and remains of great value from a history of science perspective.