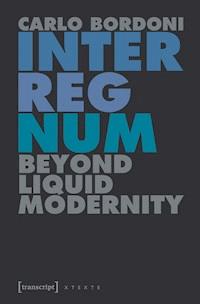 Challenging the thought of Zygmunt Bauman on the subject of liquid modernity, where everything has become unstable, precarious and uncertain, Carlo Bordoni (author with Bauman of »State of Crisis«) proposes to look at contemporary society as an »Interregnum«, a temporary break with the past. In a condition characterised by anomie, the questioning of democratic achievements and the primacy of an unbridled economy, he offers a new perspective on our social condition. Understanding the Interregnum and being aware of its instability and the social degradation that it entails can help us to make the right choices.

All rights reserved. No part of this book may be reprinted or reproduced or utilized in any form or by any electronic, mechanical, or other means, now known or hereafter invented, including photocopying and recording, or in any information storage or retrieval system, without permission in writing from the publisher.

I    Why we cannot define ourselves as modern

1. From modernity to the interregnum

2. Anomie and absence of “regnum”

3. The voice of politics and the silence of power

4. If the liquid society is no longer able to explain the present

II  The return of the subject

1. Modernity as a “discrete object”

3. Disappearance of the middle class

III  A matter of class

1. In the beginning was the class struggle

2. Class as an invention of the modern spirit

4. The destiny of global cities

The king is dead, long live the king!

This book stems from a controversy, a special kind of controversy that arose with Zygmunt Bauman on the subject of modernity. Bauman claims that we live in a liquid modernity, where everything has become unstable, precarious, temporary and uncertain. For this reason, we are not dealing with postmodernism; in actual fact, we have yet to reach the peak of modernism. Even Lyotard, to whom we owe the definition of “postmodern”, in his later writings overturned the concept, saying that “we cannot be modern without first being postmodern”.1

“We have not even come close to modernity – argues Bauman – I prefer to speak of liquid modernity. I am opposed to the use of the term postmodern because it is a negative concept. It says that we are something that in fact we no longer are. I have tried to get rid of this formula. I see a world that is leaning towards modernity, a liquid modernity, because I firmly believe that the solid version was no longer adequate.”

That is to say, a sense of positive continuity with the past, where even the liquidity is presented as a progressive value, in that it is an adaptation to the changing living conditions. Undoubtedly, between solid and liquid societies (albeit characterised by insecurity and impermanence), there is no doubt that the preference goes to the latter: solid societies are outdated, inadequate to the times and unable to understand and accept the changes. Hence, his idea of modernity is determined by a world that is constantly changing, where the “novum” is always the best, and man must strive to understand it. Everything lies in the ability to “cumprehendere”, that is, to take as one’s own, accept and understand what is happening around us.

However, faced with this positive and optimistic vision, we cannot deny the obvious epochal changes that have interrupted, modified and distorted the human journey. The task of the sociologist, if not to find solutions, is, however, to warn, to explain the reasons that have led to that change and identify the critical issues and the risks because it is not necessarily true that every change is both welcome and acceptable to those who are at the mercy of it, and is not in any way opposable or amendable. It is a delicate and dangerous task, since sociology has renounced the freedom from value judgements postulated by Max Weber, but not less essential, unless we want this science to be nothing but a gregarious, mercenary tool at the service of the powers that be and also of politics. First, by confronting itself with history, its main ally, that provides sociology with the fundamental knowledge needed to benefit from past experience.

History continues on its course for periods, for centuries, in synthetic schemas that are useful to have a clearer picture of the objectives of human actions and their consequences. It is, therefore, beneficial to define temporal “cuts” that are united by the same cultural, social and political characteristics: an operation that is purely “methodological” and has no intention of breaking the continuity of history or of human action, but to provide flexible instruments of interpretation, bearing in mind that each label given is pure nominalism. A name is given to a thing to make it more easily distinguishable from the others.

The first doubts fall on “liquidity”. Why should we continue to call society “modern” after “something” has upset the reference parameters, the features that defined its face? It is not a question of names: what is important is to understand where we are and where we are going. This is what is needed in order to correct the route and avoid mistakes. If it is true that our present seems unchangeable, having been prepared by the actions of those who have gone before us, our choices will determine tomorrow’s society, because that is how history works: we write it, but it will be our children who will suffer the consequences.

In consideration of the decline of modernity, it might be better to speak of “Interregnum”, a period of time and a waiting condition between the end of the power of a sovereign and the assumption of power by another. During this interruption of continuity an atmosphere of suspension is felt, as if the laws were devoid of any validity, as if pending others that the new ruler will waste no time in issuing. Meanwhile, the absence of the principle of authority that the sovereign personified causes imbalances, uncertainty and confusion. Normally, the interruption is brief, just long enough to attend to administrative affairs, and to prevent the country from falling into chaos. The sense of continuity is well represented by the proclamation announced loudly by the royal criers, “The king is dead, long live the king!”, which communicates the immediate handing over of the throne to his successor.

Zygmunt Bauman uses the concept of “interregnum”, according to Gramsci’s meaning of an unexpected break of continuity with the past, to better represent the present, surpassing that of “liquid modernity”, around which he built up his critical way of thinking. But the interregnum is established when a power system ends, the symbols of the authority are challenged by the new order on the horizon that has not yet imposed its laws: in our case the deceased sovereign is modernity, with its ethics, its expectations and its trust in progress.

This nerve-wracking wait, which extends beyond the limits of human endurance, assumes the characteristics of the time in the life of a generation, whose rules are the absence of rules, the predominance of the strongest, the questioning of democratic achievements, the primacy of an unbridled economy that overwhelms everything with the expectation of an abstract gain, the purpose of which is dispersed in virtual spaces.

Understanding the interregnum, being aware of its instability and the social degradation that it entails, can help us to make the right choices. Understanding if the light that we can glimpse at the end of this interregnum really coincides with the end of liquid modernity or the restoration of the same: modernity is dead, long live modernity?

IWhy we cannot define ourselves asmodern

1.FROM MODERNITY TO THE INTERREGNUM

Stating that modernity is over does not mean ignoring its merits, nor the extraordinary importance that it has had in human history. Its end does not depend on an accumulation of errors, or on an internal breakdown, but only on the natural evolution of society, within which the characteristics of the modern no longer find space; they have been surpassed and are therefore inadequate to deal with the needs of the present.

Knowing modernity through its main innovations, highlighting the critical issues that now arise in the face of rapid changes, can help us to understand our situation and help us make the right choices to get out of the “state of crisis” that proves to be – on closer inspection – not so much an accidental interlude, while waiting to return to the , as a turning point towards a new humanity.