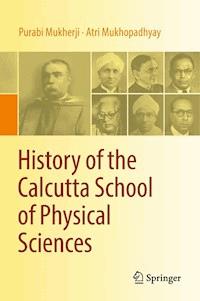 History of the Calcutta School of Physical Sciences ebook

430,56 zł
This book highlights the role of Sir Asutosh Mookerjee, founder of the Calcutta school of physics and the Calcutta Mathematical Society, and his talented scholars – Sir C.V. Raman, D.M. Bose, S.N. Bose, M.N. Saha, Sir K.S. Krishnan and S.K. Mitra – all of whom played a significant role in fulfilling their goal of creating an outstanding school of physical sciences in the city of Calcutta. The main objective of the book is to bring to the fore the combined contributions of the greatest physicists of India, who in the colonial period worked with practically no modern amenities and limited financial resources, but nonetheless with total dedication and self-confidence, which is unmatched in today’s world. The book presents the golden age of the physical sciences in India in compact form; in addition, small anecdotes, mostly unknown to many, have been brought the forefront.
The book consists of 10 chapters, which include papers by these distinguished scientists along with detailed accounts of their academic lives and main research contributions, particularly during their time in Calcutta. A synopsis of the contents is provided in the introductory chapter. In the following chapters, detailed discussions are presented in straightforward language. The complete bibliographies of the great scientists have been added at the end. This book will be of interest to historians, philosophers of science, linguists, anthropologists, students, research scholars and general readers with a love for the history of science.