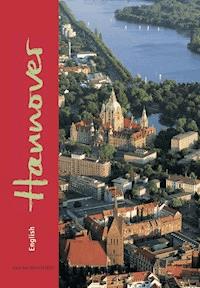 60 colorphotographs present Hannover`s most pictures views. Including picture captions and a chronicle.

The New Town Hall on Trammplatz is a symbol of Hanover. Built between 1901 – 1913 in pompous Wilhelminian style, the palatial council chambers rest on a foundation supported by more than 6000 beech piles rammed into marshy ground near the Maschsee.

One secret the city will probably never reveal is that of the origin of its name. Historians are baffled still. “High bank” (Hohes Ufer) of the River Leine says one, “reed banks” (Schilfsufer) says another. But even “cockerel banks” (Hahnenufer) is a possibility.

Certain is that Hanover’s location was favourable from the start. Situated on an intersection of important trade routes the marketplace developed rapidly into a city. Today major motorways intersect near Hanover and more long distant trains make halt here than in any other German city. The Intercity Express (ICE) trains travel in all directions.

Of all people in the 19th century, Hanover’s own King Ernest Augustus resisted the introduction of the railway. He didn’t like the idea that “every shoemaker and tailor can travel as fast as I”. But even a king couldn’t challenge the economic interests in the railway. His subjects erected his equestrian statue, surprizingly, in front of the railway station and now rendezvous without respect directly “under the horse’s tail“ Today those who arrive at the station find unmistakable evidence of the new city slogan: Hanover astonishes! Since the railways lavishly modernized the station for the EXPO 2000 it has become one of the finest in Germany. Also the station square (now free of cars) with its fountain and overhead string of lights is impressive. Here the visitor gets some idea of the qualities of the city which both the Hanoverian and newcomer regard highly.