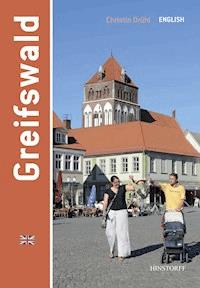 60 colorphotos showthe most beautiful views of Greifswald. With a chronology, capitons and a map.

View from the market with gables and cathedral

A walk in the heart of Greifswald leads through a placid pedestrian street with proud town houses and across the marketplace with the town hall, colored in a dark shade of red – oxblood red, past colorful café and many a valuable building from the Middle Ages. Further along the way is the university, founded in 1456, the Pomeranian State Museum, which opened in 2005, and three imposing Gothic brick churches, witnesses of the Hanseatic period. You meet strollers and historic ships on a short trip to the harbor museum. The pretty town on the Greifswald Bodden meets its guests fresh and lively.

This has not always been the case. Although Greifswald lived through the wars of the last century unscathed, the great decline began after 1945. There were no funds nor state’s will to redevelop the historic structure. Entire streets collapsed.

With the construction of the Lubmin nuclear power plant, at the end of the 1970s, new housing space was required. Whole complexes of pre-fab concrete tower blocks were built east of the old town and the suburban villas. This socialist ideal of modern living should also be applied to the city center. The excavators rolled and didn’t stop for listed buildings either: one-third of the city fell victim to the transformation, difficult to understand now, but clearly seen in the Knopfstraße, Fisch- and Löfflerstraße and the city harbor. Plans included a complete new city center. Greifswald was supposed to look like Bernau and Halle / Saale, an exemplary example of socialist urban development. Civic and student protest were prohibited and the few activists, who dared to resist, were severely sanctioned.