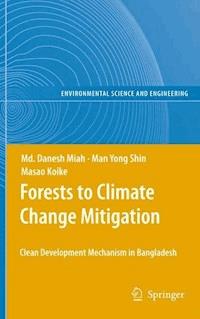 Today, the effect of global climate change is clear to all. It is clearly dangerous in developing countries such as Bangladesh. The industrial revolution caused major changes in technology, socio-economy and cultures in the late 18th and early 19th century, beginning in Britain and spreading throughout the world. The technology dominated economy was mostly dependent on energy produced from fossil fuel, which still holds true today. It is well known that fossil fuel burning has increased the GHGs to the atmosphere, thus creating global warming. Among the GHGs, the concentration of CO2 has been confirmed as the largest. Terrestrial ecosystems are clearly influencing the concentration of GHGs in the atmosphere. Greenhouse gases are constantly entering and leaving the atmosphere. Actively growing trees and other plants absorb CO2 from the atmosphere, combine it with water through photosynthesis and create sugars and more stable carbohydrates. Through this process, trees capture and store atmospheric CO2 in vegetation, soils and biomass products. The Kyoto Protocol, in 1997, explored a flexible mechanism, CDM (Clean Development Mechanism) where Annex I and non-Annex I parties interact for climate change mitigation. Forestry activities have been considered important in the arena of climate change as they act both as a sink and sources of carbon. The purpose of this book is to highlight the means of efficiently reducing global warming through forestry options in Bangladesh and the positive implications of CDM.