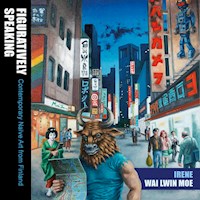 Figuratively Speaking. Contemporary Naive Art from Finland, is an introduction to new wave of popular art in Finland. The reader will meet ten artists, who have renewed, revived and reformed the concept of Naive art. Naivism is the lingua franca for all sorts of people. It does not require a guide or an interpreter to be understood. The artist always hides some jewels in the artwork. A painting or a sculpture is a mirror and a door. It reflects the time and more importantly, the viewer's world. The artist may have a message or he may have been on a philosophical quest, but the artwork - when it is finished and hangs on a gallery wall - lives an independent life. Whatever the intentions of the artist were, the artworks comes to life only when someone looks at it. Figuratively Speaking. Contemporary Naive Art from Finland esittelee kymmenen naivistitaiteilijaa ja suositun taidesuuntauksen uusia tuulia Suomessa. Naivismi on muutakin kuin humoristinen kuvaus maalaisidyllistä. Kirjan taiteilijat ovat laajentaneet perinteisen naivismin ideaa niin pop-taiteen, surrealismin kuin sci-finkin suuntaan. Suomalainen naivismi on kansainvälisesti kiinnostavaa, korkeatasoista taidetta, jota myös keräilijät ja taideinstituutio arvostavat.

ONCE UPON TIME IN FINLAND

From Finland with Love

THE FABULOUS AND THE NOSTALGIC

TO BE OR NOT TO BE

BEAUTY IN ACTION – AND IN STILL LIFE

DO ANDROIDS DREAM OF TRAVELS TO JAPAN?

This is a small book on contemporary Finnish art – with a twist. When we say “contemporary art” most people think of digital works, installations, minimalism in huge scale, experimental art for all senses, conceptual riddles and more. Even more seldom do we see traditional framed oil paintings with a fairytale-like scene and narrative in modern art museums or contemporary galleries. But here we are, browsing through a book full of colour and magical stories – claiming to be the New Wave of Finnish art. The following pages introduce the reader to ten Finnish artists, who proudly define their art as belonging to Naïvism. Naïvism is age-old, yes. Everybody remembers Henri Rousseau. Naïvism has also intertwined roots with folk art and the so called art of the “Fourth World” or commercially produced tourist artefacts, many times offered as genuine tradition in Haiti, Tanzania or any other exotic travel destination. What these Finnish artists have created is completely fresh form of Naïve art – Naïvism as an alternative for the abstract and the metaphysical in contemporary art. Art has always held a mirror in front of the viewer. The picture seen has reflected time and values. Return of the Naïve art tells that the wish for soft-spoken beauty is alive as vividly as is the mystery and magic.

ONCE UPON TIME IN FINLAND

Arts as craft has been created in Finland for thousands of years. Taste for beauty and the need to decorate daily utensils is as basic as heartbeat in every known human culture. Finland has a long history of being ruled by her neighbours. For the first Christian centuries, the Finns lived under Swedish crown c.1150-1809. The church and the rulers of Sweden were also the trendsetters for anything considered as art. Few native Finnish artists ever got the chance to actually study art. After a war 1808-1809 between Sweden and Imperial Russia, Finland became a Grand Duchy, an autonomous part of the Empire of Russia (1809-1917). The century-long period witnessed the emergence of flourishing Finnish art and culture as well as the idea of independent Republic of Finland.

From Finland with Love

National art style of Finland was created by a talented group of internationally experienced masters during the last decades of the 19th century. Celebrated artists like Akseli Gallen-Kallela and Albert Edelfelt found their inspiration both from the buzz of exciting European metropolis like Paris, but also from the Finnish national epic Kalevala and the silence of Northern nature. Modernism travelled to Finland in the suitcases of these artists. Their work defines today the basic outline of what we call the Finnish classics.

As this book is about Naïvism in Finland, lets take a short cut to history and find out where the inspiration comes from. The Finns wandered up into the Northern forests around 10 000 years ago, following the tracks of game. During those early times most parts of Finland were still covered by ice. It is quite natural, that the great green woods and the silence of polar nights created a rich tradition of fables. Nature spirits were all around. The rulers of the forest, the mighty bear and the royal moose became totem animals and symbols of power. Animals have always played a major role in arts and crafts as well as in narrative tradition.

Johanna’s Vision connects the Naïve with the noble style of the Renaissance. The artist proves beyond doubt that Naïvism is not only for the amateurs and the dilettante.

Another important feature in Naïvism – not only in Finland, but common in other countries as well – is the gentle humour. Also, there is often an all-embracing love for nostalgia. The Past is portrayed in soft colours as the Golden Age. In Europe this means depicting the agrarian village life in a romantic way. Humour is present even though it sometimes carries sadness resembling the tunes of “smile through the tears” by the great Russian author Nikolai Gogol.

For the Finns, the nostalgic eye looks back to the 1950’s, the decade of Innocence. Finland in the 1950’s was still an agrarian country. Any exhibition of Finnish Naïve art is a window to the bygone scenery of meadows, fields, forest and lakes. Flower arrangements or still life, which are not seen in contemporary art exhibitions enchant the Naïve painters. Romance is definitely in the air in these paintings, but mostly the couple pictured is more of an elderly one. People are seen in their everyday work and environment. There is seldom a festive glory going on. Interestingly, despite (or maybe because of) the long and dark winter, very few artists paint snowy scenery!

As many Naïvists, also Aho plays with a Finnish classics. Defense of Sampo by Akseli Gallen- Kallela. is one of the best known artworks in Finland. Subject is from national epic Kalevala.

There is one peculiarity in Finnish Naïvism, which differs from the mainstream European art. Anthropomorphism, where animals have taken the roles and occupations of humans is typical and extremely popular among Finnish Naïve artists. Mostly, the animals employed in the pictures are familiar from Finnish fables and folk stories. There is often the bear, the fox and the rabbit – but unlike in the fables, they do not compete in cleverness. More often they are friends in some joint effort. The animals live peacefully side-by-side with humans, or their urban life reminds the human cities with vintage cars, aeroplanes and more. Some artists tell tender stories of animals in disarming family portraits, where bunny rabbits have adopted an orphan puppy. The explanation for the anthropomorphism is the very close bond the Finns still have with the forest. Nature is near to everyone in this sparsely populated country. The old mythical animals of Finnish forest, the all-powerful bear, the cunning and slick fox and the cleverest of them all, the rabbit, have a very clear and apprehensible message to contemporary Finns. In current times of Facebook and the Internet, we still understand the meaning of these symbols dating back thousands of years.