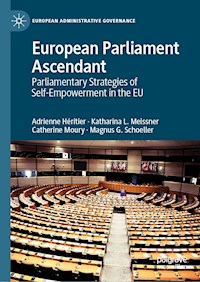 389,42 zł
"If one wants to understand why, from its modest beginnings, the European Parliament has become a major player in EU decision-making, look no further than this book. It presents, to date, the theoretically most compelling, methodologically disciplined and empirically richest account of parliamentary self-empowerment over time, across key functions and policy areas. This volume will be a main point of reference for work on the European Parliament, the dynamics of inter-institutional politics, and EU integration more generally for years to come."
—Berthold Rittberger, Professor of International Relations, University of Munich, Germany


“Anyone interested in the rise of the European Parliament as a significant actor in the EU should read this book. It offers a fascinating insight into the strategies used by the Parliament to achieve its aims and the conditions for its success or failure. It ranges widely across time and policy areas to give a comprehensive analysis of the Parliament’s changing institutional position.”
—Michael Shackleton, Professor of European Institutions, Maastricht University, The Netherlands, and former EP official


This book analyses the European Parliament’s strategies of self-empowerment over time stretching across cases of new institutional prerogatives as well as substantive policy areas. It considers why and how the Parliament has managed to gain formal and informal powers in this wide variety of cases. The book provides a systematic and comparative analysis of the European Parliament’s formal and informal empowerment in two broad sets of cases: on the one hand, it examines the EP’s empowerment since the Treaty of Rome in three areas that are characteristic of parliamentary democracies, namely legislation, the budget, and the investiture of the executive. On the other hand, it analyses the European Parliament’s role in highly politicised policy areas, namely Economic and Monetary Governance and the shaping of EU trade agreements.