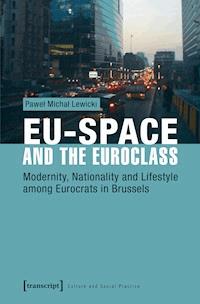 EU-Space and the Euroclass ebook

How are prestige and power anchored in EU-Brussels? Which performances are valued and which are not? Pawel Lewicki's ethnographic analysis gives an insight into how different understandings of modernity and class structures reproduce national performances and stereotypes among EU civil servants. Divisions permeate both political and private life and are not only visible on the map of the city, but also in lifestyles of people living and working in EU-Brussels. In such a cultural setting the strategies applied by newcomers to the EU are shown by Pawel Lewicki in an impressive way. He shows how their presence reveals deeper postcolonial and (post-)imperial dynamics at the heart of the Union.