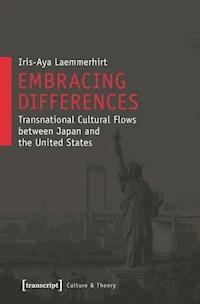 The omnipresence and popularity of American consumer products in Japan have triggered an avalanche of writing shedding light on different aspects of this cross-cultural relationship. Cultural interactions are often accompanied by the term cultural imperialism, a concept that on close scrutiny turns out to be a hasty oversimplification given the contemporary cultural interaction between the U.S. and Japan. »Embracing Differences« shows that this assumption of a one-sided transfer is no longer valid. Closely investigating Disney theme parks, sushi, as well as movies, Iris-Aya Laemmerhirt reveals a dialogical exchange between these two nations that has changed the image of Japan in the United States.