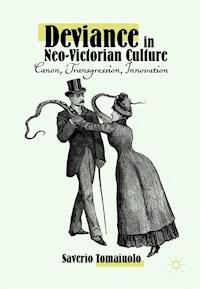 This book argues that ‘deviance’ represents a central issue in neo-Victorian culture, and that the very concept of neo-Victorianism is based upon the idea of ‘diverging’ from accepted notions regarding the nineteenth-century frame of mind. However, the study of the ways in which the Victorian age has been revised by contemporary authors does not only entail analogies with the present but proves – by introducing what is perhaps a more pertinent description of the nineteenth century – that it was much more ‘deviant’ than it is usually depicted and perceived.

Deviance in Neo-Victorian Culture: Canon, Transgression, Innovation explores a wide variety of textual forms, from novels to TV series, from movies and graphic novels to visual art. The scholarly and educational purpose of this study is to stimulate readers to approach neo-Victorianism as a complex cultural phenomenon.