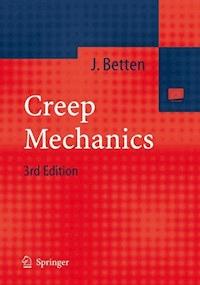 The simplest way to formulate the basic equations of continuum mech- ics and the constitutive or evolutional equations of various materials is to restrict ourselves to rectangular cartesian coordinates. However, solving p- ticular problems, for instance in Chapter 5, it may be preferable to work in terms of more suitable coordinate systems and their associated bases. The- fore, Chapter 2 is also concerned with the standard techniques of tensor an- ysis in general coordinate systems. Creep Mechanics is a part of continuum mechanics, like elasticity or pl- ticity. Therefore, some basic equations of continuum mechanics are put - gether in Chapter 3. These equations can apply equally to all materials and they are insuf?cient to describe the mechanical behavior of any particular material. Thus, we need additional equations characterizing the individual material and its reaction under creep condition according to Chapter 4, which is subdivided into three parts: the primary, the secondary, and the tertiary creep behavior of isotropic and anisotropic materials. The creep behavior of a thick-walled tube subjected to internal pressure is discussed in Chapter 5. The tube is partly plastic and partly elastic at time zero. The investigation is based upon the usual assumptions of incompre- ibility and zero axial creep. The creep deformations are considered to be of such magnitude that the use of ?nite-strain theory is necessary. The inner and outer radius, the stress distributions as functions of time, and the cre- failure time are calculated.