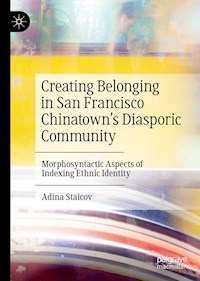 This book presents a much-needed discussion on ethnic identification and morphosyntactic variation in San Francisco Chinatown—a community that has received very little attention in linguistic research. An investigation of original, interactive speech data sheds light on how first- and second-generation Chinese Americans signal (ethnic) identity through morphosyntactic variation in English and on how they co-construct identity discursively. After an introduction to the community’s history, the book provides background information on ethnic varieties in North America. This discussion grounds the present book within existing research and illustrates how studies on ethnic varieties of English have evolved. The book then proceeds with a description of quantitative and qualitative results on linguistic variation and ethnic identity. These analyses show how linguistic variation is only one way of signalling belonging to a community and highlight that Chinese Americans draw on a variety of sources, most notably the heritage language, to construct and negotiate (ethnic) identity. This book will be of particular interest to linguists - particularly academics working in sociolinguistics, language and identity, and language variation - but also to scholars interested in related issues such as migration, discrimination, and ethnicity.