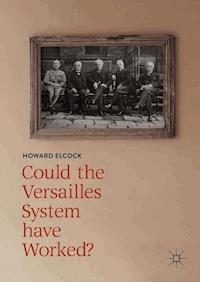 Could the Versailles System have Worked? ebook

This book explores the significance of the post-First World War peace settlement negotiated at Versailles in 1919. Versailles has always been a controversial subject and it has long been contended that the Treaty imposed unnecessarily severe conditions upon the defeated nations, particularly Germany, and in large part can be held responsible for the outbreak of war in 1939. This book considers the critical question as to whether the Treaty of Versailles established a new international settlement that could produce a peaceful and prosperous Europe, something that many have alleged was impossible. In an exhaustive analysis of the events that followed the Paris Peace Conference, Howard Elcock argues that the Versailles Treaty created a more stable diplomatic framework than has commonly been recognised, and challenges the traditional understanding that the delegates at Versailles can be held responsible for the failure to secure long-term peace in Europe.