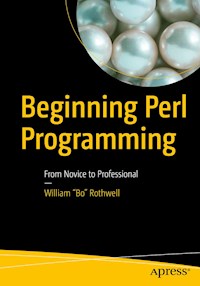 Get started with Perl 5 and learn the important core concepts of Perl programming, such as variables, flow control, expressions, and I/O. Additionally, this book covers pattern matching and shows that Perl is extremely flexible and powerful, and that it isn’t afraid of the cloud. After reading and using this book, you'll be able to start writing your own powerful scripts to solve many web and programming problems.

This is a book for those of us who believed that we didn’t need to learn Perl, and now we know it is more ubiquitous than ever. You’ll see that Perl has evolved into a multipurpose, multiplatform language present absolutely everywhere: heavy-duty web applications, the cloud, systems administration, natural language processing, and financial engineering. This book provides valuable insight into Perl’s role regarding all of these tasks and more giving you a great start in your Perl programming adventure.

What You Will Learn

Those who are new to Perl.