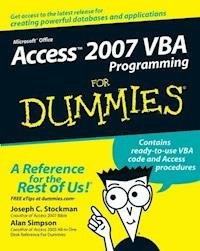 If you've been using Access for a while, you'reprobably aware of its power and potential and itching to takeadvantage of both. Access 2007 VBA Programming ForDummies takes you beyond forms and reports and shows you how touse VBA to create killer Access databases and applications. Thisgentle introduction to VBA programming covers everything you needto get started, including: * Basic programming skills and concepts * Explanations of modules, procedures, objects, andarguments * Access-unique programming activities, including SQL andrecordsets * How to use the Visual Basic editor * Creating dialog boxes, lists, drop-down menus, andfunctions * Integrating with other Office applications * Ready-to-use VBA code examples to type in or copy and pastefrom the Web Completely revised to reflect all changes found in MicrosoftAccess 2007, Access 2007 VBA Programming For Dummies givesyou access to Access like you've never had it before.