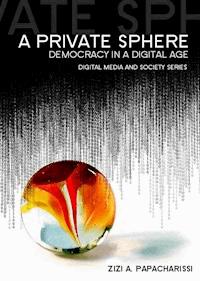 Online technologies excite the public imagination withnarratives of democratization. The Internet is a political medium,borne of democracy, but is it democratizing? Late modern democracies are characterized by civic apathy,public skepticism, disillusionment with politics, and generaldisinterest in conventional political process. And yet, publicinterest in blogging, online news, net-based activism,collaborative news filtering, and online networking reveal anelectorate that is not disinterested, but rather, fatigued withpolitical conventions of the mainstream. This book examines how online digital media shape and are shapedby contemporary democracies, by addressing the followingissues: * How do online technologies remake how we function as citizensin contemporary democracies? * What happens to our understanding of public and private asdigitalized democracies converge technologies, spaces andpractices? * How do citizens of today understand and practice their civicresponsibilities, and how do they compare to citizens of thepast? * How do discourses of globalization, commercialization andconvergence inform audience/producer, citizen/consumer,personal/political, public/private roles individuals must takeon? * Are resulting political behaviors atomized or collective? * Is there a public sphere anymore, and if not, what model ofcivic engagement expresses current tendencies and tensionsbest? Students and scholars of media studies, political science, andcritical theory will find this to be a fresh engagement with someof the most important questions facing democracies today.

Zizi A. Papacharissi, A Private Sphere

Democracy in a Digital Age

The right of Zizi A. Papacharissi to be identified as Author of this Work has been asserted in accordance with the UK Copyright, Designs and Patents Act 1988.

First published in 2010 by Polity Press

For further information on Polity, visit our website: www.politybooks.com

Media and the mythology of the new

The conditions of contemporary democracy

The dichotomy of public and private over time

The dichotomy of public and private at present

A trichotomy: the social

Technology as the architecture of the new

4   The Question of Citizenship in a Converged Environment

A long history of imperfect citizenship

The past and contemporary citizenship modalities

The liquid citizen: a combined model of flexible citizenship

5   The Public Sphere, Expired? On the Democratizing Potential of Convergent Technologies

The public sphere in contemporary democracies

A new kind of public

1 The networked self and the culture of remote connectivity

4 Social media news aggregation and the plurality of collaborative filtering

5 The agonistic pluralism of online activism

The private sphere and the networked citizen

To parents, academic and non

I wrote this book to offer an alternative explanation for how people connect to others in contemporary democracies. I owe thanks to all my friends and mentors, academic and non, who indulged me and discussed my ideas with me, agreeing, or challenging my assumptions, or offering their own perspective on what it means to be a citizen now. Above all, I appreciate you being interested. I borrow concepts from a variety of disciplines to piece together the argument for a private sphere, so I am indebted to Chuck Whitney, interdisciplinary guru and mega-mentor, for showing me how to be interdisciplinary without sacrificing argument integrity. I thank Rod Hart, for pushing me to think through the limits of my argument and beyond linguistic conventions used to describe the abstract (in this case, that was: “That’s all good Zizi, but what happens to the rest of the world when we are all enclosed in our private spheres?”). Mark Deuze introduced me to Andrea and Polity and encouraged me to continue thinking of prodused content as an act of political dissent, and I am grateful for that. And I am indebted to Andrea Drugan, my wonderful editor at Polity, for her insight and faith in my vision for this book. I also would like to thank Steve Jones and Dwight McBride at the University of Illinois-Chicago, and Concetta Stewart and Betsy Leebron at Temple University for their support and kindness. Huge thanks go to my students for allowing me to ramble on about this stuff in class and being a constant source of inspiration. Finally, a heartfelt thanks to Stella, for advising me to write this like I am telling a story to someone and reminding me to have fun with it.

“Change life!” “Change society!” These precepts mean nothing without the production of an appropriate space … new social relationships call for a new space, and vice versa.

On the evening of November 4, 2008, the day of the fifty-sixth United States presidential election, thousands of Chicago residents enthusiastically made their way to Grant Park, where the soon-tobe next President of the United States, Barack Obama, would be hosting an election night party. While the entire park area was available to Obama supporters to celebrate, and crowd projections neared a million, a smaller area had been sectioned off for the media and a few thousand attendees who were fortunate enough to procure tickets to the event. Tickets had been made available just a few days earlier, via a complex network of contacts assembled through Obama’s Illinois supporters – people who had made donations, worked in phone banks, traveled to battleground states to campaign for Obama, or signed up to receive e-mail updates from the campaign. The Obama campaign had gained a level of media-savvy notoriety by using cell phone data to send context-specific text messages, Facebook applications, and a variety of new media tools in innovative ways during the campaign.

On the night of the election, ticket holders had to proceed through a variety of screening points, so as to be admitted, ticket in hand, to the event. Seven screening points and three security checks later, the last of which employed a screening protocol equivalent to that of boarding a commercial air carrier, ticket holders were admitted to the event, equipped with giant screens, showing the latest results and result projections. The same mega-screens had been placed throughout the remainder of the park and in other public areas. Forced to wait for several hours until the results would be final and the President-elect would appear on the stage, these select few thousands amused themselves by commenting on the variety of a generally festive mix of music played on the PA system and election coverage, courtesy of CNN. Event attendees discontent with the level of information provided by CNN quickly pulled out their mobile devices, mostly iPhones or Blackberries, and googled results and projections as reported by other mainstream media and alternative news sources. Those seeking even higher levels of involvement were actively updating their status on Facebook and tweeting their latest impressions of the event they were attending. Several, if not the majority, of the attendees spent a great deal of time on their cell phones, communicating with others. A popular conversation topic, and close second to election results, was wifi access and cell phone signal availability, or lack thereof. One might expect that media access, essential to experience the event live, from home, would become irrelevant to those select few attending the coveted event live. On the contrary, for those at the event, the absence of convenient domestic access to media was felt, and addressed, through the use of mobile devices.