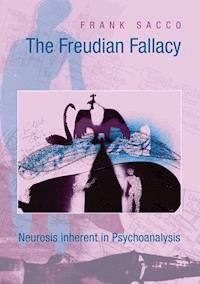 In the field of established psychiatry a radical rethink, even a change of paradigm is urgently needed – thus says the author and Doctor of Medicine Frank Sacco. To the present day psychiatrists continue to deny that fundamentalist contents of the Christian religion, such as the dogmas Fall of Man, Sodom and Gomorra, The Deluge, The Last Judgement, Purgatory and Hell can establish engrams with negative effects on today´s children. Religious strains of thought with fear of punishment in the hereafter are being misinterpreted as delusional psychoses, although such concepts were part of the school syllabus and Church teaching. The number of those made ill by mental abuse within the Church is fast increasing, according to an article in “Die Zeit” from March 31st, 2010. Our psychiatrists, who keep silent about Church matters, refer them to the clergy, i.e. the very people who caused their illnesses. This malpractice results from our neurologists having their own anxiety neurosis, which has the same origin as the neurosis of Sigmund Freud, which has been presented here in detail for the first time. The many varied kinds of harm done by the Church to our mental health are summarized under the heading: ”The Sacco-Syndrome.”

Also available by the same author:

A modern look to the story of Oedipus

A modern look to the story of Prometheus

The biggest fear of girls

What about killing “your” God

Fear of God, fear of hell

Save us from the fire of hell

The safest sex is no sex

Jesus is free of sins

Back in the Middle Ages

Fear of God instead of fear of parents

Autism and the biggest fear

One is allowed to ask children

Psychiatrists and their fear of God

Delinquency, violence and the fear of hell

Guilty for an actual death by torture?

What our children need is a new religion

A classic translation of Freud’s neurosis

“Possessed by the devil”

What shall we do?

Achange of paradigm in the field of psychiatry is due. The fear of castration is not, as Sigmund Freud mistakenly thought, the greatest of humanity’s fears. With his various faints the supposed atheist Freud shows us the way to what is actually the greatest human fear, which was also his own: The fear of God.

This normally deeply suppressed fear of eternal punishment in the hereafter literally pulled the ground from under his feet. Indeed it led him to his addiction to nicotine, which finally brought about his death.

He led psychiatry – also through his misinterpretation of the Oedipus legend – into a diagnostic and therapeutic blind alley – a situation, which has now existed for over 100 years.

Only the psychoanalysis of the “atheist” Freud, which I present here, makes possible a new beginning in the field of psychiatry.

Churches increasingly radicalize. Pope Benedict launches crash courses in “exorcism” worldwide. A single Vatican priest, Father Gabriele Amorth, expelled 70,000 devils so far. The belief in devil and hell “comes out of every crack,” it says in the newspaper “Die Zeit”.

Since Luther we know that there is no devil: Luther’s inkwell did not hit the devil, it landed on the wall instead. So Luther either was hallucinating or he was really bad in throwing.

The God of the Bible is simply unbearable, the doctor and psychoanalyst Tilman Moser recently commented accurately. In his writings he tries to – especially with regard to children – represent a “tolerable God”. This is of course not possible with the Bible which in “blasphemy” attributes “acts of violence” to our God that are truly without equal as former Bishop Dr. M. Käßmann puts it within a different context. God had organized the Flood-Holocaust and the horrors of Sodom and Gomorrah and yet today he would manage a hell where he tortures diligently. During the Jubilee in 2000 the Vatican certified as “truth” that one could die just “at the mere sight” of torture if no one prevented death (in text).

This debases our God who indeed is love as we know as enlightened people. The Bible and our bible-related religion are supposed to frighten children. That this fear makes our children sick, because they are threatened with torture, the churches do know. But they don’t care even though they know that the threat of torture means torture already and is strictly prohibited in the Federal Republic under Article 1 of the Grundgesetz – even for “gods”. Our law does not provide exemptions for gods. “Obscene” calls philosopher Sloavoj Zizek the theological justification for the Holocaust in his book “Violence” if one claims that “all of these events had a deeper meaning”. The only permissible reference to a Holocaust “should be a negative one.” This also applies to the Flood. About such a final solution, we know that since 1945, there is nothing that you could celebrate. A prosecutor, however, judged it differently: It was “socially adequate” and the assessment of a Holocaust a just matter. I think on the contrary that it is antisocial, criminalizing, and – after the legislation – banned in Germany.

Let us turn now to truth and reason. At the beginning of every great truth there is always a blasphemy, so to read in the newspaper “Die Zeit”, Oct. 13th 2011, p. →. But in fact it is more special: At the be-ginning of a great truth there often is revealed a blasphemy of our churches. No god has ever burned alive an innocent Jewish child, therefore no God would ever have initiated Sodom. Torture and its “legitimacy” are works of man, they are never God’s works. This sentence my sister was saying decades ago when she was studying theology. It always gives me a chill at the word blasphemy, since the churches have invented the term in order to burn red-haired women together with their red-haired children – alive, of course.

Let’s look together at ways in which patients of health insurances are harmed by churches and in what way our psychiatry and basically a large part of our society can let this happen; how the insurances can get more mentally healthy members and how to save valuable money. Approximately more than 50% of psychiatric clients are patients suffering from anxiety- and guilt-diseases caused by the churches. They all might be entitled to an apology and financial compensation. Tournier considers their number for even greater. For more details please refer to the text. “Those who drink from the Bible without a filter system get insane,” wrote George Bernard Shaw, and Gerhard Hauptmann also knew it. Our two major German churches, and it’s all about them, have consistently ensured that it was never allowed to enter this filter system. A religion should be good for children. If it does the exact opposite and emotionally abuses children, it is not a religion. Then it is a Dysreligion.

Guilt is such a big word and usually it is too big. Psychiatrists are not necessarily to blame for what they do. The prejudice that exists in the population, psychiatrists themselves would be mentally ill, is not just a prejudice. They commit suicide four times more often than we internists and are thus four times more likely to suffer from depression. 40% of them are estimated to be substance-related addicts and about 17% had at least once been hospitalized for mental health reasons (Source: “Hilflose Helfer”). So these people really need help urgently – my help and the help of health insurances.

Until this day, psychoanalysis is based on Freud’s theory that fear is a result of a.) accumulated, unvented sexual tension, i.e. a direct translation of denied sexual desire or

b.) the signal of a situation perceived as potentially dangerous and potentially causing trauma. Danger signals can be hidden behind in an unconscious intra-mental conflict.

I am not the only one who feels that it is pure theory to claim that sexuality is at the root of all fear. After all, one can have sex by oneself if the visit to the club was fruitless. Freud: “One may assume that the ego (in the case of unfulfilled arousal) senses dangers to which it reacts with fear.” What kind of dangers are these supposed be that result from a lack of opportunity to experience sex? Surely one day the opportunity will offer itself. Here, patience is better than fear.

With all boys, the Oedipus complex plays a pivotal role in the genesis of the disease. At the bottom of it lies an archaic Greek myth of a brutal kind that, in general, a son will fall in love with his mother. He is jealous of his father and wants to get rid of him – and vice versa, the father the son. Finally, the son would want to kill the father. A small child (and later on the inner child in the unconscious mind of an adult), might now see himself in danger of suffering the consequences of his father’s desire to castrate him, motivated by anger, revenge and jealousy, as the father also considers the son a rival for sexual love with the mother. We have all heard of this “fear of castration”. For a start, this is inaccurate from a urological point of view. A castration is the removal of the testicles and not of the penis. However, let us not be pedantic, let us take a look at Freud’s original publication, his “outline of psychoanalysis”: