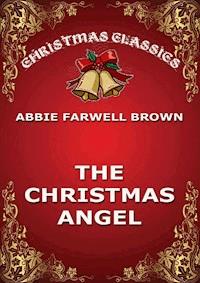 This book tells how a little toy Christmas angel brings joy into the lives of a lonely spinster and an unfortunate little girl. The story is an absorbing one, full of tender human pathos, but with a happy ending.

Chapter I - The Play Box

Chapter VII - Before The Fire

Chapter I - The Play Box

At the sound of footsteps along the hall Miss Terry looked up from the letter which she was reading for the sixth time. "Of course I would not see him," she said, pursing her lips into a hard line. "Certainly not!"

A bump on the library door, as from an opposing knee, did duty for a knock.

"Bring the box in here, Norah," said Miss Terry, holding open the door for her servant, who was gasping under the weight of a packing-case. "Set it down on the rug by the fire-place. I am going to look it over and burn up the rubbish this evening."

She glanced once more at the letter in her hand, then with a sniff tossed it upon the fire.

"Yes'm," said Norah, as she set down the box with a thump. She stooped once more to pick up something which had fallen out when the cover wasjarred open. It was a pink papier-mâché angel, such as are often hung from the top of Christmas trees as a crowning symbol. Norah stood holding it between thumb and finger, staring amazedly. Who would think to find such a bit of frivolity in the house of Miss Terry!

Her mistress looked up from the fire, where the bit of writing was writhing painfully, and caught the expression of Norah's face.

"What have you there?" she asked, frowning, as she took the object into her own hands. "The Christmas Angel!" she exclaimed under her breath. "I had quite forgotten it." Then as if it burned her fingers she thrust the little image back into the box and turned to Norah brusquely. "There, that's all. You can go now, Norah," she said.

"Yes'm," answered the maid. She hesitated. "If you please'm, it's Christmas Eve."

"Well, I believe so," snapped Miss Terry, who seemed to be in a particularly bad humor this evening. "What do you want?"

Norah flushed; but she was hardened to her mistress's manner. "Only to ask if I may go out for a little while to see the decorations and hear the singing."

"Why, all the windows along the street are full of candles," answered Norah; "rows of candles in every house, to light the Christ Child on his way when he comes through the city to-night."

"And choir-boys are going about the streets, they say, singing carols in front of the lighted houses," continued Norah enthusiastically. "It must sound so pretty!"

"They had much better be at home in bed. I believe people are losing their minds!"

Norah had no puritanic traditions to her account. Moreover she was young and warm and enthusiastic. Sometimes the spell of Miss Terry's sombre house threatened her to the point of desperation. It was so this Christmas Eve; but she made her request with apparent calmness.

"Thank you, 'm," said the servant demurely, but with a brightening of her blue eyes. And presently the area door banged behind her quick-retreating footsteps.

"H'm! Didn't take her long to get ready!" muttered Miss Terry, giving the fire a vicious poke. She was alone in the house, on Christmas Eve, and not a man, woman, or child in the world cared. Well, it was what she wanted. It was of her own doing. If she had wished—

She sat back in her chair, with thin, long hands lying along the arms of it, gazing into the fire. A bit of paper there was crumbling into ashes. Alone on Christmas Eve! Even Norah had some relation with the world outside. Was there not a stalwart officer waiting for her on the nearest corner? Even Norah could feel a simple childish pleasure in candles and carols and merriment, and the old, old superstition.

"Stuff and nonsense!" mused Miss Terry scornfully. "What is our Christmas, anyway? A time for shopkeepers to sell and for foolish folks to kill themselves in buying. Christmas spirit? No! It is all humbug,—all selfishness, and worry; an unwholesome season of unnatural activities. I am glad I am out of it. I am glad no one expects anything of me,—nor I of any one. I am quite independent; blessedly independent of the whole foolish business. It is a good time to begin clearing up for the new year. I'm glad I thought of it. I've long threatened toget rid of the stuff that has been accumulating in that corner of the attic. Now I will begin."

She tugged the packing-case an inch nearer the fire. It was like Miss Terry to insist upon that nearer inch. Then she raised the cover. It was a box full of children's battered toys, old-fashioned and quaint; the toys in vogue thirty—forty—fifty years earlier, when Miss Terry was a child. She gave a reminiscent sniff as she threw up the cover and saw on the under side of it a big label of pasteboard unevenly lettered.

"Humph!" she snorted. There was a great deal in that "humph." It meant: Yes, Tom's name had plenty of room, while poor little Angelina had to squeeze in as well as she could. How like Tom! This accounted for everything, even to his not being in his sister's house this very night. How unreasonable he had been!

Miss Terry shrugged impatiently. Why think of Tom to-night? Years ago he had deliberately cut himself adrift from her interests. No need to think of him now. It was too late to appease her. But here were all these toys to be got rid of. The fire was hungry for them. Why not begin?

Miss Terry stooped to poke over the contents of the box with lean, long fingers. In one corner thrust up a doll's arm; in another, an animal's tail pointed heavenward. She caught glimpses of glitter and tinsel, wheels and fragments of unidentifiable toys.

"What rubbish!" she said. "Yes, I'll burn them all. They are good for nothing else. I suppose some folks would try to give them away, and bore a lot of people to death. They seem to think they are saving something, that way. Nonsense! I know better. It is all foolishness, this craze for giving. Most things are better destroyed as soon as you are done with them. Why, nobody wants such truck as this. Now, could any child ever have cared for so silly a thing?" She pulled out a faded jumping-jack, and regarded it scornfully. "Idiotic! Such toys are demoralizing for children—weaken their minds. It is a shame to think how every one seems bound to spoil children, especially at Christmas time. Well, no one can say that I have added to the shameful waste."

Miss Terry tossed the poor jumping-jack on the fire, and eyed his last contortions with grim satisfaction.

But as she watched, a quaint idea came to her. She was famous for eccentric ideas.

"I will try an experiment," she said. "I will prove once for all my point about the 'Christmas spirit.' I will drop some of these old toys out on the sidewalk and see what happens.It may be interesting."

Miss Terry rose and crossed two rooms to the front window, looking out upon the street. A flare of light almost blinded her eyes. Every window opposite her along the block, as far as she could see, was illuminated with a row of lighted candles across the sash. The soft, unusual glow threw into relief the pretty curtains and wreaths of green, and gave glimpses of cosy interiors and flitting happy figures.

"What a waste of candles!" scolded Miss Terry. "Folks are growing terribly extravagant."

The street was white with snow which had fallen a few hours earlier, piled in drifts along the curb of the little-traveled terrace. But the sidewalks were neatly shoveled and swept clean, as became the eminently respectable part of the city where Miss Terry lived. A long flight of steps, with iron railing at the side, led down from the front door, upon which a silver plate had for generations in decorous flourishes announced the name of Terry.

Miss Terry returned to the play box and drew out between thumb and finger the topmost toy. It happened to be a wooden box, with a wire hasp for fastening the cover. Half unconsciously she pressed the spring, and a hideous Jack-in-the-box sprang out to confront her with a squeak, a leering smile, and a red nose. Miss Terry eyed him with disfavor.