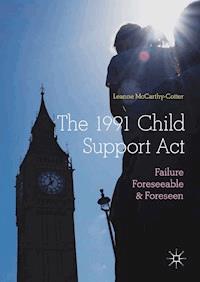 This book assesses The 1991 Child Support Act and demonstrates how its failure was ‘foreseeable’ and ‘foreseen’. It provides an understanding of the creation, and failure, of the Act, as well as providing an examination of the British policy-making process. The book re-introduces the ‘stages approach’ as an appropriate framework for examining policy-making in general, and analysing policy failure in particular. It draws on evidence gained through interviews, official documents, unpublished consultation responses, Parliamentary debates, and materials from pressure groups and think-tanks, as well as academic literature. The 1991 Child Support Act is seen as one of the most controversial and notorious policy failures in Britain. However it has received relatively little academic attention. An in-depth analysis of the policy-making process that led to the development and passage of this deeply flawed policy has largely been neglected: this book fills that gap.