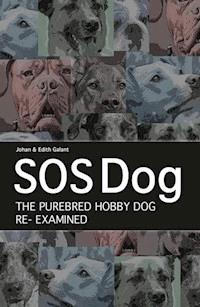 An important read for anyone involved in the purebred dog fancy today. Since about 140 years dogs are being bred closely to standards under the observation of national kennel clubs. Since this time, the purebred dog has been regarded by many as superior to an important part of the species-indigenous pariah dogs, that are looked at with contempt. Is this appropriate, or might they have some important lessons for us? Edith and Johan Gallant, who have been involved in the purebred fancy as breeders, exhibitors and judges, encourage us to take an objective look into the past and future of man's best friend: - Has the purebred dog initiative since its inception indeed improved the breeds under manipulation? - Are our purebred dogs at the onset of the twenty-first century mentally and physically fitter than the stock from which they were extracted? - Have the selectively bred breeds indeed been improved in respect of canine needs or was the effort rather an ornamental achievement? - Did failures occur and what went wrong? - Can the situation be remedied?

All rights reserved. No part of this book may be used or reproduced in any manner whatsoever without written permission from the publisher, except in the case of brief quotations embodied in critical reviews. For permission, write to Kynos Verlag, Konrad-Zuse-Str.3, 54552 Nerdlen, Germany, [email protected]

Photographs by Johan and Edith Gallant, and Roger Coucke.

The Genesis of the House Dog

The Needs of the Dog

When I was a youngster during World War II I wanted more than anything to have a dog. My family thought the idea was silly. Nobody on our street had a dog. I didn’t even know anyone who had a dog.

But I really wanted a dog. Why? Well, my favorite book was The Fireside Book of Dog Stories (1943) edited by Jack Goodman with an introduction by James Thurber, who often wrote about remarkable pets. If you took off the dust jacket it unfolded into a map of the world’s 66 breeds. On the back was A Message To America’s Dog-Owners. “Total war has made it necessary to call to the colors many of the nation’s dogs,” a plea for good pets that could be “. . . trained for duty with the Armed Forces . . .”

I wished for a dog I could send to do all those important things, like find mines, guard people and buildings, carry messages and packs and pull sleds. After the war I got my first dog. Happy but slightly disappointed because it wasn’t a purebred, I was consoled by my Uncle Joe as we tried to figure out what breeds my pup was made of. We thought every mutt had to be a combination of pre-existing breeds. I wish I had had Johan Gallant’s Africanis to read, for I would have realized my little dog was healthy, talented, one of the super-survivors of dogdom.

What has happened since? There are now four hundred breeds. Many of them can’t be trained to stay off the furniture. Many are sick with genetic diseases. Many lead painful lives; they suffer from low oxygen tension because they can’t breath properly. Many are grossly deformed. It is difficult finding trainable dogs. Agencies I’ve consulted for like the military, or service and guide dog schools, flunk better than 60% of their dogs because of health and behavioral problems. Unwanted pets overcrowd animal shelters and 10% end up euthanized every year because they are awful pets.

The Gallants have brought their thoughtful attention to this problem. This book explores our sojourn with the purebred dog. They critically review the changing procedures and motivations of twentieth century dog breeders. They spell out in detail what went wrong. The book is insightfully analytical. Also, as dog lovers, the Gallants give us hope and suggestions on how to improve things in the twenty-first century and beyond.

Johan and Edith Gallant have been actively involved in national and international canine matters since 1975. Their participation with the dog as a species actually defined their path of life. Moreover, they were in it together. Their entire life with dogs was a joint and harmonizing effort.

The first twenty years of this participation essentially dealt with the discovery and exploration of the pure-bred dog and the complex ramifications of organizations by which the fancy of the pure-bred dog is practiced. Their participation ranged from exhibiting at shows, participating in obedience and working trials, dedicated breeding and eventually judging in various aspects of the hobby. These experiences together with their responsibilities as members of different task committees of national and international canine organizations exposed them to the world of the pure-bred dog. The authors came to the conclusion that the hobby was not always aimed at the welfare of the dog but sometimes served the feeling of self-importance by certain fanciers.

As from 1994, during travels through the southern African hinterland, and in their quest for the essence of the dog, they discovered the humble and rural life of the native African dogs. They realized that all those years, as ill-informed bystanders, they had looked at these dogs with contempt. The western worship for the ‘pure’ breeds of dogs had veiled their vision. They soon were faced with the fact that these rural dogs represent an ancient land race. They are certainly not ‘improved’ or streamlined into fashionable homogeneity. But their behavior is so intense and uniform, their physical prowess and health condition so remarkable that they inspired the authors to engage in an in depth research.

The urge to write this book emerged from the apprehension that Canis familiaris or the domestic dog as a whole has been badly understood. The modern world, in respect of the western culture, has idolized and romanticized the artificial selection of dogs. At the same time aboriginal land races are disregarded and this despise is passed on to their traditional custodians. In this regard the authors intend to be the dog’s mouthpiece.

My wife had been invited to judge at a championship show for dogs organized by a club for which I had been the founding chairman twenty years ago. As we drove up to the sports grounds where the show was to be held, the last thirty years of our life unfolded as a sudden flash in my mind. I had a brusque, crystal clear overview of what had happened to us since we, as dog lovers, became gradually but fully involved in the hobby of purebred dogs. Astonishingly, the flash left me with terrible questions: Had it all been worthwhile? Had we really achieved something? For a moment, my mind heaved away, and it occurred to me that the answer was “not really,” and that the only way to reverse this feeling was to find out why, to analyze the matter in all objectivity, and to record my observations in writing in a down-to-earth manner. It would be of no purpose to beat about the bush. Open cards and an in-depth, objective inquisition might help to throw some light on the subject. I also realized that it would not suffice to carry out a thorough soul search into my wife's and my own involvement in canine matters. We would have to approach the problem in a holistic manner to discover the nature of the matters that were bothering me. I felt that somehow we had done our best. We certainly contributed our share to the hobby of purebred dogs, but altogether we were only one of the many links in a rattling chain of events.

My wife interrupted my dreaming and with suspicion in her voice asked, “What are you thinking?” “Well,” I said, “I just had a flashback of our activities and the whereabouts with our dogs since it all started. Don't worry, park the car, go greet the organizers, and do a fine judging job. I will hang around, do some more thinking, and tell you the whole story tonight on our way back.”

It was a beautiful spring day, and the morning sun gave credit to the venue. The grass was mowed short, and the rings in which the judging of the dogs was to take place were neatly set up and clearly defined by bunting advertising the food company that was sponsoring the show. Tens of colorful gazebos were lined up along the rings, and there was a hustle and bustle of people and dogs all getting prepared for the battle of the rosettes. I carefully observed the dogs. Some obviously looked bored, but yes, others gave the impression that they enjoyed the happening. As the show had not yet started, the majority of the dogs were being prepared for the great moment. Most of the gazebos, especially those around the rings where the so-called Utility and Toy groups were to be judged, had a grooming table placed in the middle. Miniature Schnauzers, Shih Tzus, Poodles in all sizes, little Pomeranians, Pekingese, and many others were frantically being blow dried, brushed, and combed.