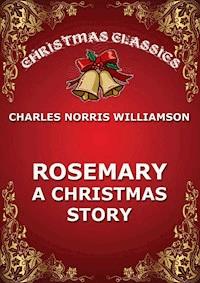 The White Girl On The Terrace: The Rose Girl At The Casino

When The Curtain Was Down

Rosemary In Search Of A Father

The White Figure At The Door

When A Man Goes Shopping

The Last Word Of Mademoiselle

The White Girl On The Terrace: The Rose Girl At The Casino

There was a young man in Monte Carlo. He had come in a motor car, and he had come a long way, but he hardly knew why he had come. He hardly knew in these days why he did anything. But then, one must do something.

It would be Christmas soon, and he thought that he would rather get it over on the Riviera than anywhere else, because the blue and gold weather would not remind him of other Christmases which were gone—pure, white, cold Christmases, musical with joy-bells and sweet with aromatic pine, the scent of trees born to be Christmas trees.

There had been a time when he had fancied it would be a wonderful thing to see the Riviera. He had thought what it would be like to be a rich man, and bring a certain girl here for a moon of honey and roses.

She was the most beautiful girl in the world, or he believed her so, which is exactly the same thing; and he had imagined the joy of walking with her on just such a terrace as this Casino terrace where he was walking now, alone. She would be in white, with one of those long ermine things that women call stoles; an ermine muff (the big, "granny" kind that swallows girlish arms up to the dimples in their elbows) and a hat which they would have bought together in Paris.

They would have bought jewels, too, in the same street where they found the hat; the Rue de la Paix, which she had told him she longed to see. And she would be wearing some of the jewels with the white dress—just a few, not many, of course. A string of pearls (she loved pearls) a swallow brooch (he had heard her say she admired those swallow brooches, and he never forgot anything she said); with perhaps a sapphire-studded buckle on her white suéde belt. Yes, that would be all, except the rings, which would lie hidden under her gloves, on the dear little hands whose nails were like enamelled rose leaves.

When she moved, walking beside him on the terrace, there would be a mysterious silky whisper and rustle, something like that you hear in the woods, in the spring, when the leaves are crisp with their pale green youth, and you shut your eyes, listening to the breeze telling them the secrets of life.

There would be a fragrance about the white dress and the laces, and ermine, and the silk things that you could not see,—a fragrance as mysterious as the rustling, for it would seem to belong to the girl, and not to have come from any bottle, or bag of sachet powder. A sweet, fresh, indefinable fragrance, like the smell of a tea rose after rain.

They would have walked together, they two, and he would have been so proud of her, that every time a passer-by cast a glance of admiration at her face, he would feel that he could hardly keep in a laugh of joy, or a shout, "She is mine—she is mine."

But he had been poor in the old days, when from far away he had thought of this terrace, and the moon of honey and roses, and love. It had all been a dream, then, as it was now; too sweet ever to come true.

He thought of the dream, and of the boy who had dreamed it, half bitterly, half sadly, on this his first day in the place of the dream.

He was rich—as rich as he had seen himself in the impossible picture, and it would have been almost too easy to buy the white dress, and the ermine, and the pearls. But there was no one for whom he would have been happy to buy them. The most beautiful girl in the world was not in his world now; and none other had had the password to open the door of his heart since she had gone out, locking it behind her.

"She would have liked the auto," he said to himself. And then, a moment later, "I wonder why I came?"

It was a perfect Riviera day. Everybody in Monte Carlo who was not in the Casino was sauntering on the terrace in the sun; for it was that hour before luncheon when people like to say, "How do you do?—How nice to meet you here!" to their friends.

The young man from far away had not, so far as he knew, either enemies or friends at Monte Carlo. He was not conscious of the slightest desire to say "How do you do?" to any of the pretty people he met, although there is a superstition that every soul longs for kindred souls at Christmas time.

He had not been actively unhappy before he left the Hotel de Paris and strolled out on the terrace, to have his first sight of Monte Carlo by daylight. Always, there was the sore spot in his heart, and often it ached almost unbearably at night, or when the world hurt him with its beauty, which he must see without Her; but usually he kept the spot well covered up; and being healthy as well as young, he had cultivated that kind of contentment which Thoreau said was only desperate resignation in disguise. He took an interest in books, in politics, and sport and motor cars, and a good many other things; but on the terrace, the blue of the sea; the opal lights on the mountains; the gold glint of oranges among green, glittering leaves; the pearly glimmer of white roses thrown up like a spray against the sky, struck at his heart, and made the ache come back more sharply than it had for a long time.

If he had been a girl, tears would have blinded his eyes; but being what he was, he merely muttered in anger against himself, "Hang it all, what a wretched ass I am," and turning his back on the sea, made his way as fast as he could into the Casino.

It was close upon twelve o'clock, and the "Rooms" had been open to the public for two hours. The "early gamblers" thronging the Atrium to wait till the doors opened, had run in and snatched seats for themselves at the first tables, or marked places to begin at eleven o'clock, if crowded away from the first. Later, less ardent enthusiasts had strolled in; and now, though it was not by any means the "high season" yet, there were rows of players or lookers on, three deep round each table.

The young man was from the South—though a South very different from this. He had the warm blood of Virginia in his veins, and just so much of the gambler's spirit as cannot be divided from a certain recklessness in a man with a temperament. He had seen plenty of life in his own country, in the nine years since he was twenty, and he knew all about roulette and trente et quarante, among other things desirable and undesirable.

Still, gambling seemed to be made particularly fascinating here, and he wanted to be fascinated, wanted it badly. He was in the mood for the heavy hush of the Rooms, for the closeness, and the rich perfumes, which mingling together seem like the smell of money piled on the green tables; he was in a mood for the dimmed light like dull gold, gold sifted into dust by passing through many hands.

He had got his ticket of admission to the Casino, after arriving yesterday evening; but the Rooms had not pleased him then. He had not played, and had merely walked through, looking at the people; but now he went to a trente et quarante table, and reaching over the shoulders of the players—not so many as in the roulette rooms,—he put a five hundred franc note on couleur. It won. He let the money lie, and it won again. A third time and a fourth he left the notes on, and still luck was with him. He was in for a good run.

As it happened, nobody else had been playing higher than plaques, the handsome hundred franc gold pieces coined for the Principality of Monaco; and people began to watch the new comer, as they always do one who plays high and is lucky. On the fifth deal he had won the maximum. He took off half, and was leaving the rest to run, when a voice close to his shoulder said, "Oh, do take it all off. I feel it's going to lose now. To please me."

He took off half, and was leaving the rest to run, when a voice close to his shoulder said, "Oh, do take it all off” —Rosemary.

He glanced aside, and saw an exceedingly pretty, dark face, which looked vaguely familiar. With a smile, he took up all the notes, and only just in time. Couleur lost; inverse won.

"Oh, I'm so glad," said the owner of the pretty face. She spoke English with a slight, but bewitching foreign accent; and her eyes shone at him like brown jewels under the tilted brim of a hat made all of pink and crimson roses. She was rather like a rose, too, a rich, colourful, spicy rose, of the kind which unfolds early. He knew that he had seen her before, and wondered where.

After all, it was rather nice to be spoken to by someone other than a hotel manager or a waiter; someone who was good to look at, and friendly. He lost interest in the game, and gained interest in the girl.

"I hope you don't think I speak always to strangers, like that," said the girl in the rose hat. "But you see, I recognized you at once. I don't know if you remember me? No, I'm afraid you don't."

"Of course I remember you, only I can't think where we—"

"Why, it was in Paris. You saved my mother's little dog from being run over one day. We were both so grateful. Afterwards we saw you once or twice at tea at the Ritz, and you took off your hat, so you must have remembered then. Ah me, it's a long time ago!"

"Not so very," said the young man. "I remember well, now." (He wished her mother had not been quite such an appalling person, fat and painted.) "It was only last October. I'd just come to Paris. It was my first day there, when I picked up the little dog. Now, on my first day here, you pay me back for what I did then—as if it needed paying back!—by making me pick up my money. That's quite a coincidence."