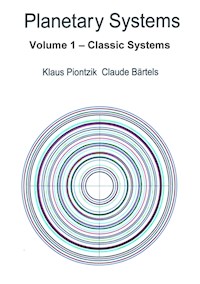 The theory, which is developed in this book is based on the remake and expansion of an old idea. It was the idea of a central body, pref-erably in the shape of a ball, formed around or in concentric layers. Democritus was the first who took this idea with his atomic theory and thereby introduced himself to the atoms as fixed and solid build-ing blocks. Is the atom used as a wave model, that allows to interpret concentric layers as an expression of a spatial radial oscillator so you reach the current orbital model of atoms. Now, this book shows that these oscillatory order structures on earth and their layers are (geologically and atmospherically) implemented. In addition the theory can be applied on concentric systems, which are not spherical but flat, like the solar system with its planets, the rings that have some planets and the moons of planets or also the neighbouring galaxies of the milky way. This principle is applicable on fruits and flowers, such as peach, orange, coconut, dahlia or narcis-sus. This allows the conclusion that the theory of a central body as a spa-tial radial oscillator can be applied also to other spherical phenomena such as spherical galactic nebulae, black holes, or even the universe itself. This in turn suggests that the idea of the central body constitutes a general principle of structuring in this universe as a spatial radial os-cillator as well as macroscopic, microscopic and sub microscopic.

1.2 Polyhedron models of the earth

1.4 Assertions for an oscillation structure

2 – Approach for an oscillation model

2.2 Addition and multiplication of waves

3 – Frequencies of the earth

3.3 Table of the earth layers

3.7 Layers of the atmosphere

3.8 Layers of the atmosphere and Laplace

5.3 The electric field of the Earth

6.3 Circuit to the measuring procedure

7 – Converting a numerical sequence in an e-function

7.4 Determination of the approximation line

7.6 Determination of a new numbering

8.2 The orbits of the planets

8.5 Satellite galaxies of the milky way

This book is the essence and progression of two presentations, the author K. Piontzik has held on 3/14/2009 to the association for the support of the geobiology in Brügge and on the spring conference of the research group for geobiology in 4/24/2009 in Eberbach.

Seen from today's perspective „lattice structures of the earth magnetic field“ delivers a collection of facts and basic informations. A closed homogeneous model is recognizable in attempts, but the golden threat is still missing.

This book is a working hypothesis, which can be falsified after the today's epistemology by Popper.

From it the information of a physical measuring method occurs which represent the experimentum crucis for this working hypothesis.

Overall, the model shown here, represents a holistic approach on an oscillation base that explains several structures of the earth.

What is valid on the earth, must be valid also "in" the earth and with it is valid both on the large and small scale. What means for the authors that the macroscopic oscillation structures have her correspondences also in the (sub) microscopic (atomic) area.

The course of the development in the last both years has shown, that the whole themes about stratifications, oscillations and grids can be attributed to a central concept with which all phenomena can be explained: it is the concept of the planetary system.

The question which raises here is: What is to be understood by a planetary system? In addition the concept must be examined such closer.

Planetary means a global earth phenomenon. And the concept system implies that a certain order exists.

Planetary systems are so global or earth-enforcement structures. Two systems are recognised in the following picture: the earth's surface even with her lying underneath geologic bowls and the atmosphere with her stratifications.

The neighbourhood of the planet Earth can be explained by a spherical space with a radius of 2 or 3 Earth radii. Here, the concept of neighbourhood is reminiscent of the definition from the topology.

The geometrical structure would have to be defined even closer. This happens in the following chapters.

Structures that are considered as planetary systems:

4) Electric field of the earth

5) Polyhedron models of the earth

In the following we will have a look at the listed systems.

The geometrical structuralisation of the geologic bowls exists as concentric balls in the earth.

The geometrical structuralisation of the atmospheric layers exists as concentric balls round the earth.

Illustration 1.1.3 – magnetic field of the earth

Illustration 1.1.4 – electric field of the earth

The geometrical structure exists as concentric spheres round the earth. Polar (plus minus poles) and radial structures (electric field strength) still appear.

Geologic spheres, atmospheric layers, earth magnetic field and the electric field own a geometrical structuralisation which exists of concentric spheres.

The geologic bowls lie within the earth. The atmospheric layers and the electric field lie outside, around the earth.

1.2 – Polyhedron models of the earth

At the end of the 19th century the geologists W.L. Green and A. de Lapparent compared the shape of the earth with a tetrahedron.

A similar comparison did in the sixties of the twentieth century B.L. Litschkow and N.N. Schafranowski with an octahedron. Litschkow published a little later the model of a dodecahedron and an icosahedron for the earth shape.

Illustration 1.2.1 – polyhedron models of the earth

Illustration 1.2.2 – polyhedron models of the earth

These polyhedron models of the earth were developed primarily by geologists. There is only one body missing to receive a certain set from bodies.

The corner points of the polyhedrons lie on the infolding sphere. All edges are transferred to the ball surface. In contrast to all other planetary systems lines with finite lengths occur here, due to the structure of the polyhedron.

You can project the edges or corners of the polyhedron on the enveloping ball.

The best way is to depict all corners of a polyhedron as intersections of circle of latitude and meridians, such like the geographical system.

The octahedron is the only platonic solid in which all edges of the polyhedron and grid lines fully match. The grid is used by three, each perpendicular on each other standing circles formed. As a result, the spherical surface is decomposed into eight equal parts.

The tetrahedron has the same separation as the cube, a tetrahedron can be represented as an inside body of a cube. Edges of the polyhedron occur but they are not directly represented in the coordinate system.

Another possibility for the tetrahedron is to see this as a triangular pyramid. So one would get three meridians, and a parallel, but also an irregular grid.

Also the icosahedron provides a regular grid with five meridians and two circles of latitude. Edges of the polyhedron occur, but that are not directly represented in the coordinate system.

Only the dodecahedron builds irregular distances with five meridians and four circles of latitude.

All together the following statement can be formulated:

Polyhedrons are equivalent to grids on a ball surface.

For the systems to be looked exist, according to 1.1 and 1.2, following geometrical structuralisations:

1.4 – Assertions for an oscillation structure

This vibration structure form usually spatial structures, whose basic patterns include geometric solids, both have harmonical ratios to each other.

According to definition 1.0.2 is valid:

1.4.2.1 - A planetary system can be explained by a spatial Oscillation structure.

1.4.2.2 - All planetary systems can be explained by just one spatial oscillation structure.

2.0 – Approach for an oscillation model

The aim of this chapter is the description of basic mathematical and physical terms and conditions, that serve the development of an equation for an oscillation structure and allow a quantification of the model. The approach is based on oscillations around a ball.

(Frequency multiplied with wavelength is equal to speed of light)

How to get vibrations around a ball? - Analogous to the Bohr model of the atom, if it contains the surrounding Electron as a wave by de Broglie:

Illustration 2.0.2 – oscillations around a ball

It fits only an integer number of oscillations around the globe.

The wavelength is proportional to the circle angle alpha:

Condition for n vibrations around a globe:

Theoretically, the following form is possible:

Here, the oscillation circle does not close after one revolution, but only take m turns.

A standing wave around a sphere can be interpreted as a stationary state. Thus, each state of a wave is spatially fixed. The question now is: how many waves fit around a globe?

In classical mechanics, degrees of freedom is the number of freely selectable, independent movements of a system

Because a sphere is rotationally symmetric, so rotations are irrelevant. A ball has therefore 3 freedoms regarding a wave propagation. Therefore, three independent waves around the globe are possible.

Due to the spherical shape, the three freedoms can be represented as spherical coordinates.

2) The second wave runs around the equator

3) The third standing wave runs radially - based from the center

There exists a mathematical concept namely for the first two examples, that is suitable for a representation - the spherical harmonics.

Standing waves on the surface of a sphere can be treated as spherical harmonics. There are 3 types:

Zonal spherical harmonics only depend on the latitude.

Sectorial spherical harmonics depend only by the degree of longitude.

Tesseral spherical harmonics depend of the latitude and the longitude.

A complete route in terms of square grid on a sphere can not materialize. Only grid systems are developed, which are designed as the geographic grid system. There are always two poles. The corresponding "meridians" and "circle of latitude" then make the grid.

2.2 – Addition and multiplication of waves

spherical harmonics can present itself as two sine- or cosine waves, which are perpendicular to one another and additative or multiplicative overlap.

The zero points of both waves are transferred on the consideration level, as shown in Illustration 2.2.1 right.

Two vertical waves can be added by following qualitative rules:

It is striking that all zero fields are diagonal to each other.

Connecting the zero fields as shown in Illustration 2.2.3.