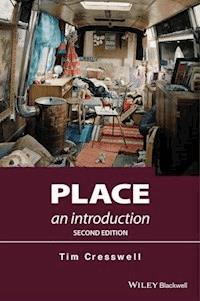 Thoroughly revised and updated, this text introduces students ofhuman geography and allied disciplines to the fundamental conceptof Place, combining discussion about everyday uses of the term withthe complex theoretical debates that have grown up around it. * A thoroughly revised and updated edition of thishighly successful short introduction to Place * Features a new chapter on the use of Place innon-geographical arenas, such as in ecological theory, art theoryand practice, philosophy, and social theory * Combines discussion about everyday uses of the term'Place' with the more complex theoretical debates thathave grown up around it * Uses familiar stories drawn from the news, popularculture, and everyday life as a way to explain abstract ideas anddebates * Traces the development of the concept from the 1950sthrough its subsequent appropriation by cultural geographers, andthe linking of Place to politics

Place as a Way of Understanding

The Remainder of the Book

2: The Genealogy of Place

The Emergence of Place in Western Thought

Radical Human Geography and the Politics of Place

Place as “Being-in-the-World” versus Place as Social Construct

3: Place in a Mobile World

The End of Place?

4: Reading “A Global Sense of Place”

“A Global Sense of Place”

Beyond Reactionary and Progressive Senses of Place

Creating Place in a Mobile World

A Nice Place to Live

Regions and Nations as Places

The Homeless – People without Place

Other Books and Papers on Place

Figure 1.2    A Manhattan community garden. These were built on vacant lots by local residents when the land had been abandoned by the government. When land became valuable the city government demolished many of these in the East Village in order to build apartments and parking lots. Source: the photo was taken by participant/team Corn Fed Chicks as part of the Commons:Wikis Take Manhattan project on October 4, 2008. Creative Commons Attribution-Share Alike 3.0 Unported license. http://creativecommons.org/licenses/by-sa/3.0 CC-BY-SA-3.0 Creative Commons Attribution-Share Alike 3.0 truetrue (Contributed by author) [CC-BY-SA-3.0 (http://creativecommons.org/licenses/by-sa/3.0)], via Wikimedia Commons.

Figure 1.3    Tompkins Square Park, New York City. Here sunbathers relax on the central knoll but this place has been the site of numerous protests and struggles. Source: photo by David Shankbone [CC-BY-SA-3.0 (http://creativecommons.org/licenses/by-sa/3.0) or GFDL (http://www.gnu.org/copyleft/fdl.html)], via Wikimedia Commons.

Figure 1.4    St. Mark's Place in Manhattan's East Village. A busy shopping street full of boutiques, coffee shops, and other signs of a gentrified place. Source: photo by Beyond My Ken (own work) [GFDL (http://www.gnu.org/copyleft/fdl.html) or CC-BY-SA-3.0-2.5-2.0-1.0 (http://creativecommons.org/licenses/by-sa/3.0)], via Wikimedia Commons.

Figure 3.2    Cinderella's Castle at Walt Disney World, Orlando, Florida. Authors have argued that tourist places such as Disney World are not real places but “placeless” places or “pseudo-places” with no real history and no sense of belonging. Source: photo by SteamFan (own work (Nikon D80)) [GFDL (http://www.gnu.org/copyleft/fdl.html), CC-BY-SA-3.0 (http://creativecommons.org/licenses/by-sa/3.0/) or CC-BY-2.5 (http://creativecommons.org/licenses/by/2.5)], via Wikimedia Commons.

Figure 3.3    Widecombe-in-the-Moor, a village on Dartmoor, England. When people think and write about place they often fix on old small places that seem “authentic” such as this village on Dartmoor. Think, for instance, of the way Heidegger wrote about a cabin in the Black Forest to make his argument about “being-in-the-world.” Source: photo by Manfred Heyde (Own work) [GFDL (http://www.gnu.org/copyleft/fdl.html) or CC-BY-SA-3.0-2.5-2.0-1.0 (http://creativecommons.org/licenses/by-sa/3.0)], via Wikimedia Commons.

Figure 3.4    Chhatrapari Shivaji Airport, Mumbai. Airports, by contrast, are frequently described as non-places or placeless. They do not appear to have histories and are marked by transience and mobility. Source: photo by Alex Graves from Lugano, Switzerland (Mumbai Airport) [CC-BY-SA-2.0 (http://creativecommons.org/licenses/by-sa/2.0)], via Wikimedia Commons.

Figure 5.3    The Statue of Liberty, New York City. The Statue of Liberty is a world-recognized symbol of the United States which celebrates and memorializes a particular story of American nationhood as a nation of more or less welcome immigrants. It is an official place of memory. Source: photo by William Warby (originally posted to Flickr as Statue of Liberty) [CC-BY-2.0 (http://creativecommons.org/licenses/by/2.0)], via Wikimedia Commons.

Figure 5.4    Ellis Island Immigration Museum hall. This room was used to process immigrants when Ellis Island was used as an immigration station. Now it is part of a museum built to commemorate the immigrant experience and its role in American life. Source: photo by Jean-Christophe BENOIST (Own work) [CC-BY-3.0 (http://creativecommons.org/licenses/by/3.0)], via Wikimedia Commons.

Figure 5.9    The Angel of the North. Source: photo by The Halo (taken by The Halo) [Public domain], via Wikimedia Commons.

Figures 5.10 and 5.11    “Nowhereisland” by Alex Hartley. As the island sculpture travelled around the southwest coast of England it was accompanied by a land-based converted horse van which acted as both a museum for the new nation and an embassy where citizens could sign up. Source: photos by author.

magazine (1876). Here the domestic space of the home, complete with woman, child, and dinner on the table, is threatened by the tramp who comes to the door.

For details of our global editorial offices, for customer services, and for information about how to apply for permission to reuse the copyright material in this book please see our website at www.wiley.com/wiley-blackwell.

The right of Tim Cresswell to be identified as the author of this work has been asserted in accordance with the UK Copyright, Designs and Patents Act 1988.

All rights reserved. No part of this publication may be reproduced, stored in a retrieval system, or transmitted, in any form or by any means, electronic, mechanical, photocopying, recording or otherwise, except as permitted by the UK Copyright, Designs and Patents Act 1988, without the prior permission of the publisher.

Wiley also publishes its books in a variety of electronic formats. Some content that appears in print may not be available in electronic books.

Designations used by companies to distinguish their products are often claimed as trademarks. All brand names and product names used in this book are trade names, service marks, trademarks or registered trademarks of their respective owners. The publisher is not associated with any product or vendor mentioned in this book.

Limit of Liability/Disclaimer of Warranty: While the publisher and author have used their best efforts in preparing this book, they make no representations or warranties with respect to the accuracy or completeness of the contents of this book and specifically disclaim any implied warranties of merchantability or fitness for a particular purpose. It is sold on the understanding that the publisher is not engaged in rendering professional services and neither the publisher nor the author shall be liable for damages arising herefrom. If professional advice or other expert assistance is required, the services of a competent professional should be sought.

1.5 Graffiti on the Lower East Side, Manhattan

5.7 The inside of Nant-y-Cwm Steiner School in West Wales

6.2 A ringnecked parakeet on a bird feeder in Bromley, London, UK

Thinking and writing about place has, for me, been an interactive activity for many years. I have been fortunate enough to have encountered some outstanding teachers as a student. These include Peter Jackson, Jacquie Burgess, Denis Cosgrove, Yi-Fu Tuan, and Robert Sack. They have all inspired me in different ways and I hope some of that inspiration is evident in this book. Now that I am a teacher myself I find myself increasingly indebted to students who have taken ideas and run with them in startling directions. They include Gareth Hoskins, Peter Adey, Bradley L. Garrett, Kimberley Peters, Craig Martin, Amy Cutler, Andre Novoa, terri moreau, Rupert Griffiths, Weiqiang Lin, and Laura Prazeres. In the years between the first edition and this edition I spent seven happy years at the Geography Department at Royal Holloway, University of London, which proved to be a remarkable site of intellectual endeavor for a cultural geographer such as myself. Landscape Surgery was a particularly wonderful arena to discuss ideas about place, landscape, mobility, material culture, and just about anything else a cultural geographer could wish for. I am more particularly indebted to Carol Jennings for her careful reading of this manuscript and many useful suggestions. Michael Brown is the true inventor of the word anachorism that appears in Chapter 6. Finally, many thanks to Gerry Pratt and Nick Blomley for the invitation to write the original version of this book and to the good people at Wiley-Blackwell for helping along the way. Justin Vaughan at Wiley-Blackwell has been consistently encouraging and has provided much needed prods in the years since I agreed to write the second edition.

Extracts from Space, Place, and Gender (1994) by Doreen Massey are used by permission of Polity Press, University of Minnesota Press, and the author.

The first edition of Place: A Short Introduction was published in 2004 as part of a series of short introductions in geography. The idea was to focus on a concept rather than a traditional subfield. I had some doubt as to whether such a book would have a market as a teaching tool. While a concept such as place is clearly central to the discipline of geography – the discipline I was writing for and from – it is rarely the case that there is a course with place as its singular focus. I have been delighted, therefore, at the way the first edition has been used so widely both in geography and beyond. It was much more successful that I ever imagined. It certainly has been widely used as a text book in geography courses at both undergraduate and postgraduate level. What is more encouraging is the way it has been used across disciplines it was not explicitly aimed at. These include creative writing, English literature, American studies, religious studies, architecture, and interdisciplinary liberal arts. There are even courses with the title “place studies” that use it.

In addition to the obvious importance of place across a range of disciplines in the academy, there has been a resurgence of place issues in the wider world beyond. The events of the Arab Spring and Occupy were frequently framed around place issues. There have been lively discussions about the effects of multinationals and chain stores on the downtowns of cities. The idea of the local (a derivative of place) has been powerful in the rise of new-old forms of food culture and economic systems. Writing about place in the form of creative non-fiction has seen a renaissance in the United Kingdom (the place I know best) with place-based books appearing in national newspapers and in the bestseller lists. Art, too, has continued to ask questions of place and belonging.

Researching and writing about place, then, is clearly both an interdisciplinary endeavor and a practice that extends beyond the academy. For this reason the second edition of Place: A Short Introduction is a more interdisciplinary and outward-looking book, less focused on the discipline of geography. Geography has a lot to offer, thanks to its history of focusing on place, but it is not the sole owner of the concept. This is an offering, from the place of geography, to the wider world. This edition is about 50 percent longer than the first edition and, therefore, not so “short.” I hope, nevertheless, to have maintained the accessibility of the first edition. In addition to a more generally interdisciplinary sense to the book, there are added sections which reflect the engagement with place across disciplines. These include sections on philosophy, architecture, art and place, information technologies, assemblage theory, and animal geographies amongst others. Otherwise encouraging notes from a few readers noted a number of errors in the first edition and I am grateful to them. I have kept a list and have hopefully rectified these issues.

Place is one of the two or three most important terms for my discipline – geography. If pushed, I would argue that it is the most important of them all. Geography is about place and places. But place is not the property of geography – it is a concept that travels quite freely between disciplines and the study of place benefits from an interdisciplinary approach. Indeed, the philosopher JEFF MALPAS (2010) has argued that “place is perhaps the key term for interdisciplinary research in the arts, humanities and social sciences in the twenty-first century.”