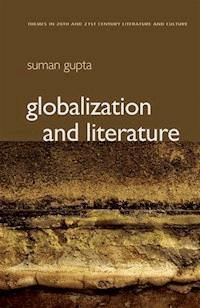 Themes in Twentieth- and Twenty-First-Century Literature and Culture

1 The Nuances of Globalization

TRAVELS OF A TERM

PLAN OF THIS STUDY

A NOTE ON TRANSLATION

7 The Globalization of Literature

Themes in Twentieth- and Twenty-First-Century Literature and Culture

The right of Suman Gupta to be identified as Author of this Work has been asserted in accordance with the UK Copyright, Designs and Patents Act 1988.

First published in 2009 by Polity Press

For further information on Polity, visit our website: www.polity.co.uk

The Child is not father of the Man,

But he may already be il miglior fabbro,

And that’s worrying enough for this dad.

I have run various arguments and ideas that figure in this study past friends, and have benefited immensely from their responses. I am particularly grateful to the following for clearing up some of my confusions: Tapan Basu, Taieb Belghazi, Milena Katsarska, Tope Omoniyi, Bob Owens, Zhao Baisheng and, as ever, Xiao Cheng. Andrea Drugan had suggested the theme of this book to me and encouraged me to pursue it; I am grateful for this and will remain so even if she regrets it all later. Thanks are due to my colleagues in the English Department of the Open University for bearing with me while this was being written; and to Roehampton University for continuing to give me access to space and resources. No one but I am responsible for the shortcomings and errors in the following pages.

The Nuances of Globalization

American novelist Richard Powers’s Plowing the Dark (2000) revolves around an early (1980s) prototype of a virtual reality chamber, the ‘Cavern’. Our familiarity with global electronic networks and virtual environments, which characterizes the new millennium at the portal of which this novel appeared, is prefigured in the ‘Cavern’. Protagonists from different disciplines are invited to use this nascent space to realize their visions and advance their understanding of the world. The main protagonist, artist Adie Klarpol, struggles to find an effective aesthetic output from the ‘Cavern’ and doesn’t achieve much beyond creating a 3-D version of Henri Rousseau’s Jungle paintings. Others (mathematicians, meteorologists, etc.) are more successful in advancing their fields. Economist Ronan O’Reilly, like Klarpol, also reaches towards failure in his engagement with the ‘Cavern’, but, unlike Klarpol’s, it is a grand world-encompassing failure. O’Reilly’s ambition is to use the ‘Cavern’ to create a model of the whole globe, and thereby to compute economic futures by taking into account not just a mass of existing economic data but also all kinds of social and political histories and scenarios. His model works – or ultimately doesn’t – as a visualizable virtual environment: in the ‘Cavern’ a virtual globe containing all the information within easy access is thrown up. O’Reilly can simply step into the globe and see the whole physical-social-economic world from the inside, as it were, and call up and compute with all the data he needs from anywhere in the world. O’Reilly’s achievement is first described in Powers’s economical yet vivid style as follows:

O’Reilly assigned the wand’s thumbwheel to a zoom function. A little scrolling and the Earth swelled to a medicine ball or imploded into an atom. With the rub of a thumb, Afghanistan, as it had lately in the world’s imagination, ballooned from an invisible speck to a billboard that filled the field of view.

When the globe grew large enough, O’Reilly simply stepped inside. The Cavern knew where his head was at all times, and rehung its coordinates accordingly. The crust of countries that the projectors served up looked even better from the underside than from the out. Inside, from the vantage of the earth’s core, O’Reilly could inspect the whole theatre at one glance, with no hidden hemisphere on the far side of a projection. The unbroken surface spread out above him in all directions, like the constellations of the night sky.

He set the wand’s buttons to throw various layers over his planetarium display. The slices of tonal register tracked the range of a variable as it wrestled its way through the proving grounds. Armed with canned data, O’Reilly took the globe out for a test spin. Per capita GDP, in single-year frames. As a function of energy consumption. As a function of consumer spending. All the classical formulae, for which he had only clinical patience, ran as ten-second, color-stabbing short subjects before Our Feature Attraction.

To this clean, coherent display, Ronan fused his ten-dimensional recursive cellular automata. All the furious systems, the flex and tensions of abductors and carpals clasped together in an invisible hand to rock a cradle now eminently observable. On the surface, sunsets and dawns illuminated the familiar jigsaw of the world’s nations. Underneath, a seething snake’s nest of cooperation and competition rippled through the global markets, deciding them. (Powers 2000, 119)

O’Reilly’s extraordinarily ambitious programme fails, it later emerges, because it doesn’t do what it’s designed to do: predict economic futures with a reasonable degree of accuracy.