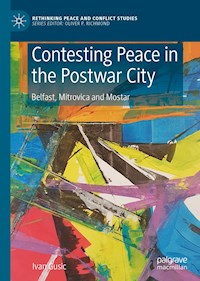 “Contesting Peace in the Postwar City is key reading for urban and peace and conflict scholars. In this impressive and meticulously researched book, Gusic reflects on the ways in which divisions are routinised in the everyday landscape of divided cities and skilfully investigates how change and continuity are governed in postwar urban spaces. The book provides rich empirical material from the cities of Mostar, Mitrovica and Belfast, drawing on nuanced fieldwork insights.”

“Ivan Gusic sets out a powerful, theoretically critical and empirically rich account of the trajectories of cities after war. The strength of the work is that it brings an understanding of the urban condition into relation with ethno-national conflict and the survival of violence. Gusic unsettles dominant narratives in peace studies by offering a grounded evaluation of three cities coming out of violence and points to the importance of place in peacebuilding processes.”

“Detailed case studies of Belfast, Mitrovica and Mostar show how cities are often engines of what Ivan Gusic calls ‘war in peace’. This on-trend study combines the latest research from critical urban studies with peace and conflict studies to produce a very accessible and internationally relevant book. It is highly recommended.”

This book explores why the postwar city reinforces rather than transcends its continuities of war in peace. It theorises war-to-peace transitions as conflicts over how to socio-politically order society and then analyses different urban conflicts over peace(s) in postwar Belfast (Northern Ireland), Mitrovica (Kosovo) and Mostar (Bosnia-Herzegovina). Focusing on themes such as educational segregation, clientelism, fear, paramilitaries, and infrastructure, it shows how conflict lines from war are perpetuated in and by the postwar city. Yet it also discovers instances where antagonisms are bridged by utilising the postwar city’s transcending potential. While written in the nexus between peace research and urban studies, this book also speaks to political geography, international relations, anthropology, and planning.