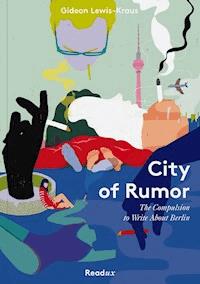 Is Berlin an artistic mecca or the place where ambition goes to die? Few cities' identities have been so much debated in the past decades on such an international scale. In City of Rumor, Gideon Lewis-Kraus gives an account of his shifting understanding of the city, its pitfalls and possibilities. Lewis-Kraus lived in Berlin for three years and his honest, thought-provoking essay explores the ways in which we are burdened and freed by our environments in general, and why Berlin demands our attention again and again.

City of Rumor:The Compulsion to Write About Berlin

There is a measure of unaccountable time you can spend in Berlin and write it off as extended-holiday frippery. But there comes a Rubiconic moment, after which you’ll find it hard to leave without having something to say for yourself. You’ve probably gone to Berlin in part because of its reputation for world-historical fun. If you’ve found yourself there in some bounded way—on a fellowship before graduate school, say—the fun serves just fine. But if your move is an open-ended affair, the fun takes its course, and then, to avoid that obscure sense of having failed at being somewhere, you need an exit strategy. Some exit strategies allow you to stay: falling in love with a German, say, or going to German graduate school. Other exit visas allow you to leave. Falling in love with someone in Paris. Getting a job in London. You need some finding that retroactively validates the whole experiment. Because you’ve set yourself up, is the thing. As a writer, I hoped I might find that justification in telling a story that looped the whole thing together in a reasonable way. For a time I thought I’d accomplished that—I wrote a book that began with a story about how I ended up in Berlin, what I did and, more importantly, did not do there, and why and how I managed to leave—and I looked forward to never having to write about Berlin again. I have found, however, that I cannot shake the urge to write more about Berlin, to revise what I have already written about Berlin, and furthermore to disclaim in advance as insufficiently definitive anything I might conceivably write about Berlin in the future. I am tempted now to say that this in and of itself reveals something definitive about Berlin, something about the impossibility of saying anything definitive about Berlin. The infinite regressions of the place remain with you long after you’ve left. They remain with you even after you’ve quit writing that you’ve quit writing about the why and what of it all.

When I decided to move to Berlin it was at least in part because it seemed like the sort of place where one might plausibly become a writer. San Francisco, where I’d been living for no reason, seemed to me the sort of place one might write book reviews, which is what I’d been doing. In Berlin, in contrast, whatever I paid attention to would be something necessarily novel, which meant that the writing I’d go on to produce about such novelties would justify the fact that I had somewhat sheepishly taken to calling myself a writer. The plan, though, had never been to write about Berlin, exactly. This is strange, I realize now. I wonder what it was that I did plan to write, if I wasn’t going to write a novel and I wasn’t going to write about what it was like to live in this novel-seeming place.