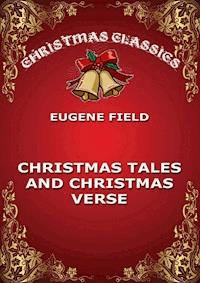 This is a book of tales and verse for children, of that sort which holds older readers with an equal fascination. Mr. Field is a master of this delicate sort of art, and the book abounds in a great variety of themes and moods, from the mediaeval romance to the symbolic prose-poem, or the modern child-story. A common spirit of tenderness and of a sort of elfish humor, if we may be allowed the expression, binds the various tales and verses together as on one string, and gives a very distinct and unified impression to the whole volume. "The Mouse and the Moonbeam" is as exquisite a bit of folly and wistful pathos as one could wish for, and so simple in style and word! The book is profusely illustrated by Florence Storer. 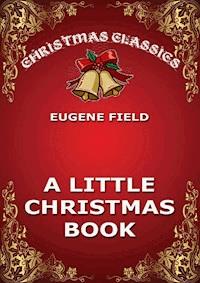 The Symbol And The Saint

The Three Kings Of Cologne

The Coming Of The Prince

The Mouse And The Moonbeam

Star Of The East

Why do the bells of Christmas ring?Why do little children sing?

Once a lovely shining star,Seen by shepherds from afar,Gently moved until its lightMade a manger's cradle bright.

There a darling baby lay,Pillowed soft upon the hay;And its mother sung and smiled:"This is Christ, the holy Child!"

Sing, O my heart!Sing thou in rapture this dear morn

Whereon the blessed Prince is born!

Sing, angel host!Sing of the star that God has placedAbove the manger in the East;Sing of the glories of the night,The virgin's sweet humility,The Babe with kingly robes bedight,—Sing to all men where'er they beThis Christmas morn;For Christ is born,That saveth them and saveth me!

Sing, sons of earth!O ransomed seed of Adam, sing!God liveth, and we have a king!The curse is gone, the bond are free—By Bethlehem's star that brightly beamed,By all the heavenly signs that be,We know that Israel is redeemed;That on this mornThe Christ is bornThat saveth you and saveth me!

Sing, O my heart!Sing thou in rapture this dear mornWhereon the blessed Prince is born!And as thy songs shall be of love,So let my deeds be charityBy the dear Lord that reigns above,By Him that died upon the tree,By this fair mornWhereon is bornThe Christ that saveth all and me!

The Symbol And The Saint

Once upon a time a young man made ready for a voyage. His name was Norss; broad were his shoulders, his cheeks were ruddy, his hair was fair and long, his body betokened strength, and good-nature shone from his blue eyes and lurked about the corners of his mouth.

"Where are you going?" asked his neighbor Jans, the forge-master.

"I am going sailing for a wife," said Norss.

"For a wife, indeed!" cried Jans. "And why go you to seek her in foreign lands? Are not our maidens good enough and fair enough, that you must need search for a wife elsewhere? For shame, Norss! for shame!"

But Norss said: "A spirit came to me in my dreams last night and said, 'Launch the boat and set sail to-morrow. Have no fear; for I will guide you to the bride that awaits you.' Then, standing there, all white and beautiful, the spirit held forth a symbol—such as I had never before seen—in the figure of a cross, and the spirit said: 'By this symbol shall she be known to you.'"

"If this be so, you must need go," said Jans. "But are you well victualled? Come to my cabin, and let me give you venison and bear's meat."

Norss shook his head. "The spirit will provide," said he. "I have no fear, and I shall take no care, trusting in the spirit."

So Norss pushed his boat down the beach into the sea, and leaped into the boat, and unfurled the sail to the wind. Jans stood wondering on the beach, and watched the boat speed out of sight.

On, on, many days on sailed Norss—so many leagues that he thought he must have compassed the earth. In all this time he knew no hunger nor thirst; it was as the spirit had told him in his dream—no cares nor dangers beset him. By day the dolphins and the other creatures of the sea gambolled about his boat; by night a beauteous Star seemed to direct his course; and when he slept and dreamed, he saw ever the spirit clad in white, and holding forth to him the symbol in the similitude of a cross.

At last he came to a strange country—a country so very different from his own that he could scarcely trust his senses. Instead of the rugged mountains of the North, he saw a gentle landscape of velvety green; the trees were not pines and firs, but cypresses, cedars, and palms; instead of the cold, crisp air of his native land, he scented the perfumed zephyrs of the Orient; and the wind that filled the sail of his boat and smote his tanned cheeks was heavy and hot with the odor of cinnamon and spices. The waters were calm and blue—very different from the white and angry waves of Norss's native fiord.

As if guided by an unseen hand, the boat pointed straight for the beach of this strangely beautiful land; and ere its prow cleaved the shallower waters, Norss saw a maiden standing on the shore, shading her eyes with her right hand, and gazing intently at him. She was the most beautiful maiden he had ever looked upon. As Norss was fair, so was this maiden dark; her black hair fell loosely about her shoulders in charming contrast with the white raiment in which her slender, graceful form was clad. Around her neck she wore a golden chain, and therefrom was suspended a small symbol, which Norss did not immediately recognize.

"Hast thou come sailing out of the North into the East?" asked the maiden.

"And thou art Norss?" she asked.

"I am Norss; and I come seeking my bride," he answered.

"I am she," said the maiden. "My name is Faia. An angel came to me in my dreams last night, and the angel said: 'Stand upon the beach to-day, and Norss shall come out of the North to bear thee home a bride.' So, coming here, I found thee sailing to our shore."

Remembering then the spirit's words, Norss said: "What symbol have you, Faia, that I may know how truly you have spoken?"

"No symbol have I but this," said Faia, holding out the symbol that was attached to the golden chain about her neck. Norss looked upon it, and lo! it was the symbol of his dreams,—a tiny wooden cross.

Then Norss clasped Faia in his arms and kissed her, and entering into the boat they sailed away into the North. In all their voyage neither care nor danger beset them; for as it had been told to them in their dreams, so it came to pass. By day the dolphins and the other creatures of the sea gambolled about them; by night the winds and the waves sang them to sleep; and, strangely enough, the Star which before had led Norss into the East, now shone bright and beautiful in the Northern sky!

When Norss and his bride reached their home, Jans, the forge-master, and the other neighbors made great joy, and all said that Faia was more beautiful than any other maiden in the land. So merry was Jans that he built a huge fire in his forge, and the flames thereof filled the whole Northern sky with rays of light that danced up, up, up to the Star, singing glad songs the while. So Norss and Faia were wed, and they went to live in the cabin in the fir grove.

To these two was born in good time a son, whom they named Claus. On the night that he was born wondrous things came to pass. To the cabin in the fir grove came all the quaint, weird spirits,—the fairies, the elves, the trolls, the pixies, the fadas, the crions, the goblins, the kobolds, the moss-people, the gnomes, the dwarfs, the water-sprites, the courils, the bogles, the brownies, the nixies, the trows, the stille-volk,—all came to the cabin in the fir grove, and capered about and sang the strange, beautiful songs of the Mist-Land. And the flames of old Jans's forge leaped up higher than ever into the Northern sky, carrying the joyous tidings to the Star, and full of music was that happy night.

Even in infancy Claus did marvellous things. With his baby hands he wrought into pretty figures the willows that were given him to play with. As he grew older, he fashioned, with the knife old Jans had made for him, many curious toys,—carts, horses, dogs, lambs, houses, trees, cats, and birds, all of wood and very like to nature. His mother taught him how to make dolls too,—dolls of every kind, condition, temper, and color; proud dolls, homely dolls, boy dolls, lady dolls, wax dolls, rubber dolls, paper dolls, worsted dolls, rag dolls,—dolls of every description and without end. So Claus became at once quite as popular with the little girls as with the little boys of his native village; for he was so generous that he gave away all these pretty things as fast as he made them.

Claus seemed to know by instinct every language. As he grew older he would ramble off into the woods and talk with the trees, the rocks, and the beasts of the greenwood; or he would sit on the cliffs overlooking the fiord, and listen to the stories that the waves of the sea loved to tell him; then, too, he knew the haunts of the elves and the stille-volk, and many a pretty tale he learned from these little people. When night came, old Jans told him the quaint legends of the North, and his mother sang to him the lullabies she had heard when a little child herself in the far-distant East. And every night his mother held out to him the symbol in the similitude of the cross, and bade him kiss it ere he went to sleep.