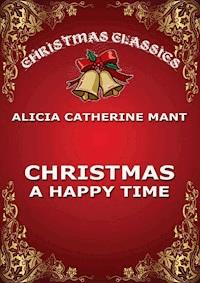 Harriet and Elizabeth Mortimer were two very pretty, and generally speaking, very good little girls. Their kind papa and mamma had taken a great deal of pains that they should be good, and it was very seldom that they vexed them by being otherwise. A very happy time was now expected in the family at Beech Grove, by the arrival of John and Frederick Mortimer from school: it was within a few days of Christmas; and as the sisters and brothers had never, till the last few months, been separated, their meeting together again was looked forward to with general and lively pleasure.

'Do you see anything of the stage, Elizabeth?' said Harriet to her sister, who had been running down to the end of the plantation to peep over the gate, and listen if she could hear the approach of wheels.

'No: there is nothing in sight,' replied Elizabeth, whose teeth chattered from the cold, while her hands were so benumbed, she could scarcely close the gate, which she had ventured to open about half an inch.

'They will never come,' said Harriet; 'but you should not open the gate, you know papa and mamma both told us we should not do that. And how cold you are! you are all over in a shiver. Come let us have a run round, and that will warm you. Remember mamma begged of us not to stand still in this sharp cutting wind.'

'Yes, so she did,' replied Elizabeth; 'and indeed it is very, very cold, down at that corner. And they will not come any the sooner for our standing there.'

And according to Harriet's proposal, the two little girls began to run round the grounds, which put them in a complete glow; and Elizabeth's fingers very soon ceased to ache with cold.

As they passed the green house, they saw the gardener matting up some myrtles on the outside; and Elizabeth stopped, to enquire at what time the coach was likely to pass.

'I look for it every minute, Miss,' replied the man; 'and that's the reason I keep about here, that I may be handy to help the young gentlemen out, and bring in the boxes and that. I look for them to be much grown, Miss, for 'tis a fine bit now since we have seen them. I don't know what Master John will say about his myrtle that he used to be so proud of, for I am afraid its dead. But hark ye, Miss—sure that's wheels.—Yes, and there comes a coach too.'

And away posted the gardener, and both the little girls after him.

It was a coach; and it was a very noisy one, or at least the passengers were very noisy. Such a blowing of horns, and hallooing and huzzaing. But the coach went by without stopping at the gate; and although the gardener ran after it, and endeavoured to speak with the coachman, his voice was drowned in the multitude of little voices within and without the coach; and he was obliged to return, disappointed himself, to the disappointed young ladies, who stood anxiously looking out, within the gate.

Before there was time to express any regret, another coach appeared in sight, and this might be the coach so much longed for. This also approached with shouting and blowing of horns; again the gardener put himself forward and this time the coach seemed to draw down towards the gate. Harriet even fancied she saw her dear brother John looking out of one of the windows. But again she was disappointed. The coachman, though he drew to the side of the road, scarcely allowed his horses to stop; and flinging the servant a letter, which he took from his waistcoat pocket, again he flourished his whip, and again the coach passed on.

'A letter for your papa, Miss,' said the gardener, picking it up and offering it to the young ladies: 'Shall I take it to James to carry in?'