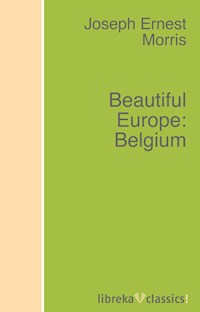 Beautiful Europe: Belgium by Joseph E. Morris libreka classics – These are classics of literary history, reissued and made available to a wide audience. Immerse yourself in well-known and popular titles!

It needs, indeed, an effort of the imagination at the moment of writing to think of Belgium as in any sense a component part of "Beautiful Europe." The unhappy "cockpit" of the Continent at the actual hour is again in process of accomplishing its frightful destiny—no treaty, or "scrap of paper," is potent to preserve this last, and weakest, of all the nations of Western Europe from drinking to the dregs the cup of ruin and desolation. Tragic indeed in the profoundest sense—in the sense of Aristotle—more tragic than the long ruin of the predestined house of Oedipus—is this accumulated tragedy of a small and helpless people, whose sole apparent crime is their stern determination to cling at any cost to their plighted word of honour. I have been lately glancing into a little book published about five years ago, in which a view is taken of the Belgian character that no one could term indulgent. "It is curious," says the writer in one place, "how few Belgians, old or young, rich or poor, consider the feelings or convenience of others. They are intensely selfish, and this is doubtless caused by the way in which they are brought up." And, again, in another chapter, he insinuates a doubt as to whether the Belgians, if ever called on, would even prove good soldiers. "But whether the people of a neutral State are ever likely to be brave and self-sacrificing is another thing." Such a writer certainly does not shrink—as Burke, we know, once shrank—from framing an indictment against an entire people. Whether Belgium, as a nation, is self-sacrificing and brave may safely be left to the judgment of posterity. There is a passage in one of Mr. Lecky's books—I cannot put my finger on the exact reference—in which he pronounces that the sins of France, which are many, are forgiven her, because, like the woman in the Gospels, she has loved much. It is not our business now, if indeed at any time, to appraise the sins of Belgium; but surely her love, in anguish, is manifest and supreme. When we contemplate these firstfruits of German "kultur"—this deluge of innocent blood, and this wreckage of ancient monuments—who can hesitate for a moment to belaud this little people, which has flung itself thus gallantly, in the spirit of purest sacrifice, in front of the onward progress of this new and frightful Juggernaut? Rather one recalls that old persistent creed, exemplified perhaps in the mysteries, now of the Greek Adonis, now of Persian Mithras, and now of the Roman priest of the Nennian lake, that it is only through the gates of sacrifice and death that the world moves on triumphant to rejuvenation and life. Is it, in truth, through the blood of a bruised and prostrate Belgium that the purple hyacinth of a rescued European civilization will spring presently from the soaked and untilled soil?

Yet even if German "kultur" in the end sweep wholly into ruin the long accumulated treasures of Belgian architecture, sculpture, and painting—if Bruges, which to-day stands still intact, shall to-morrow be reckoned with Dinant and Louvain—yet it would still be worth while to set before a few more people this record of vanished splendour, that they may better appreciate what the world has lost through lust of brutal ambition, and better be on guard in the future to protect what wreckage is left. All these treasures were bequeathed to us—not to Belgium alone, but to the whole world—by the diligence and zeal of antiquity; and we have seen this goodly heritage ground in a moment into dust beneath the heel of an insolent and degraded militancy. Belgium, in very truth, in guarding the civilization and inheritance of other nations, has lavishly wrecked her own. "They made me keeper of the vineyards; but my own vineyard have I not kept."

Luckily, however, it is not yet quite clear that the "work of waste and ruin" is wholly irreparable. One sees in the illustrated English papers pictures of the great thirteenth-century churches at Dixmude, Dinant, and Louvain, made evidently from photographs, that suggest at least that it is not impossible still to rebuild the walls of Jerusalem. Dixmude, indeed—I judge from an interior view—is possibly shattered past hope; but Dinant and St. Pierre, at Louvain, so far at least as their fabrics are concerned, seem to lack little but the woodwork of their roofs. It is only a few years ago since the writer stood in the burnt-out shell of Selby Abbey; yet the Selby Abbey of to-day, though some ancient fittings of inestimable value have irreparably perished, is in some ways not less magnificent, and is certainly more complete, than its imperfect predecessor. One takes comfort, again, in the thought of York Minster in the conflagration caused by the single madman Martin in 1829, and of the collapse of the blazing ceilings in nave and chancel, whilst the great gallery of painted glass, by some odd miracle, escaped. Is it too much to hope that this devil's work of a million madmen at Dixmude or Nieuport may prove equally incomplete?

In the imperfect sketch that follows I write of the aspect of Belgium—of its cities, that were formerly the most picturesque in Europe; of its landscapes, that range from the level fens of Flanders to the wooded limestone wolds of the Ardennes—as I knew these, and loved them, in former years, before hell was let loose in Europe. And perhaps, the picture here presented will in time be not altogether misrepresentative of the regenerated Belgium that will certainly some day arise.