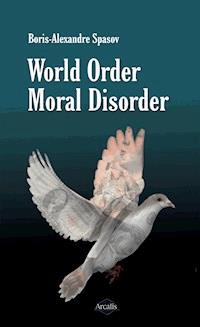 This essay entitled World Order Moral Disorder is essentially about contradictions inherent in human nature.War and peace are discussed together with good and evil and we arrive at the question “is non war the same as peace?” An analysis of these two words underlines conflicting predilections within us: how can man go to war, i.e. break the peace, when whilst he is at war he is searching desperately for peace?Can one know good if one has never known evil? These two opposing concepts feed off one another and we are led to ask ourselves if a certain amount of evil is not sometimes indispensable. This duality within us has extended to include the whole planet, hence the title “World Order” which generates the appendage “Moral disorder”. To address this issue the author makes use of a reading grid based upon human relations: trust, mistrust, defiance and violence and illustrates themes relating to the economy, sociology and politics.Far from taking a pessimistic tone, this essay helps in our search for answers which will permit us to move towards a reorganised world order which takes into account the planetary issues with which we are faced today.EXCERPTMan continues to plan his future by repeating the errors of the past, following his thousand-year habit of considering peace as simply an interval between wars. Today, peace is dependent on the balance of power imposed by allegedly deterrent weapons, weapons supposedly held in respect and fear by potential enemies.Do we not sometimes have the impression that history, our history, resembles a huge wheel turning faster and faster, but moving on the spot rather than advancing?Maybe we’re too blind or too selfish, to envisage a blueprint for peace; we have thought more of and worked more for material progress, rather than spiritual and philosophical progress. But how can we separate mind from matter, how can we devise a dialogue for peace, when we have as a starting point the necessities of life to which we as humans are subject?ABOUT THE AUTHORThe “humanist” Boris Alexandre SPASOV, formerly Deputy Director of Radio Caribbean International, graduate of the Centre d’études diplomatiques et stratégiques in Paris and the author of several books including World Order- Moral Disorder & Humanity... What a Story! is above all a man of the people, a passionate and candid eyewitness far from the safe, comfortable couch ideologies and politically correct attitudes of our time.

Boris-Alexandre Spasov has chosen to settle for the moment on the island of Tahiti in the South Pacific. Originally from Brittany in France, in his heart of hearts, he’s a Breton from Ville-ès-Nonais in the Pays de Rance region of France. The eldest of four children, three boys and a younger sister, at the tender age of 3 in accordance with old Celtic customs he was fostered out to the care of friends where he then spent his younger years. His parents, lived and worked in the Hutchinson factory in Montargis but the family were reunited as frequently as possible, and always warmly welcomed by his foster family

This new essay from Boris-Alexandre Spasov’s pen follows his previous book Comprendre le Conflit Yougoslave (Understanding the Yugoslavian Conflict), published in May 2006 by Editions Terra Arcalis. This new work presents an approach that is excellently explained in its preface by his long-time friend Dr. François Bernard, both men studied at the Centre d’Études Diplomatiques et Stratégiques in Paris and know each other well.

The theme addressed here by Boris Alexandre Spasov, “World order, Moral disorder” is in keeping with both his intellectual and professional training and at a deeper level echoes his origins and identity. This is the perfect time to bring up this topic since it’s the subject of chaotic debate in Europe at the moment.

The history of the Spasov family is a somewhat tragic story in its own right. Boris Alexandre’s father, Spas Spasov, who died 25 years ago in France, was a trained engineer specialising in railways and bridges. Following a decision by King Boris of Bulgaria, he became a Commander in the Bulgarian army. This was thanks to Boris’s grandfather Alexandre Spasov who had been Head of Police for the Bulgarian kingdom, and was therefore close to the Royal family. With his help, a few escapades from Spas’s misspent youth, which had not been forgotten by the family, were granted a royal pardon and quite rightly so.

As we know, Russia invaded the Eastern bloc countries following the Yalta agreements, and the Communists put prices on a few heads, including that of Spas Spasov. At the same time his father Alexandre was deported to the Siberian Gulags where eventually after an amputation and ill-treatment he died. With a view to consolidating their power, the new ruling power in Bulgaria wanted to put an end to any possible groups of opposition abroad and so Spas was obliged to flee. Sentenced to death he was pursued for several years across Europe and even into French territory by the Bulgarian secret services.

This struggling aristocrat, adrift, buffeted and battered by conflicts, then encounters another shipwrecked soul, a young Dalmatian woman: Andgelka Severdija. Born in a boat between Zaton and Sibenic, before her mother was able to reach the maternity hospital, Andgelka, daughter of the “water people”, treks all the way across Europe in the company of other refugees bound for France.

The couple, fleeing the war find themselves firstly in Paris, then Montargis where both find work at the Hutchinson factory. In hiding for his life, Spas is unable to make use of his officer training, or engineering background, he has escaped his pursuing killers twice and needs to be careful.

It is primarily for this reason, that during a stay with friends, disguised as a precautionary flight in order to escape the Bulgarian Communist secret services, the couple entrust little Boris-Alexandre to a foster family. When pursuit stops after a few years, Andgelka is able to work for a little longer until the arrival of their 3rd then 4th child. Boris-Alexandre is then able to rejoin his family and they regularly return to Ville-ès-Nonais on holiday.

He will little by little become the Breton that we know today, when he swims the mouth of the River Rance, he worries not a soul, so obviously is he in his element, a worthy descendant of the water people just like his mother.

As he wanders the banks of this sublimely beautiful coastal river, he will never forget he’s been adopted by this country and thus he adopts in his turn, that which will become his interior universe.

With this anchor of an almost maternal nature, it is only natural that he integrate the Centre d’Études Diplomatiques et Stratégiques des Affaires Étrangères in Paris, thus echoing his father’s Bulgarian career. Then he continues his studies with a Masters in Histoire, Espace et Civilisation. Issued from such a background it’s the least he could do.

In this way the man that is Boris Alexandre Spasov finds inner harmony, discovering little by little via his random research that he was fated to come to Brittany, a land of Celts. Just as his own ancestors who settled in Bulgaria and Dalmatia between four and five thousand years ago are also Celts: he was deeply moved when in a regional newspaper, he was described as a “Slavic Breton who has not forgotten his Balkan heritage”.

One’s identity is a construction of oneself, it takes into account hereditary components recorded in both our individual and collective unconsciousnesses, that are in turn enriched or troubled by our education and instruction. This mille-feuille like construction motivates our choices and our behaviour, a style or ethic common to the human race.

In this new essay, Boris-Alexandre will raise his thinking to the very essence of Humanity, to the concepts of good and evil that divide and torture us. He confronts head on the difficult exercise of putting to one side the emotions and trauma of the tragedy lived by his parents and of which he himself as the oldest was particularly affected. His father was extremely strict, his education very military, very severe, as it often was at the time, with all the knocks and punishments, which were no doubt designed to harden him against life’s misfortunes.

He will master his chosen subject by making an accounting of the difficulties encountered when one attempts to understand the dualities buried within the heart of humanity: good and evil, war and peace…

Throughout this text we shall discover how he expands his thoughts, how he provides us with the means to see further; he opens doors for us and together from question to question, we arrive at an idea of what we would like to be, somewhere between the ideal and utopia. We rediscover the desire that lives within and is at work, deep in our hearts, a desire for good, a desire for love, a desire for harmony. We then see that this desire is also perverse, that wanting good, we do evil and suffer evil in our turn.

Angela Vannier the Celtic poet, once said to me that life is a forge upon which we are all hammered into shape, understanding neither the relevance, nor utility.

Maybe Boris-Alexandre will find the impetus in the poet’s words, if he needs one, to continue his quest to encounter all the Earths peoples, just like the Celts.

“War” and “Peace” are opposites in the human world, in the same way that the terms “good” and “evil” are part of our everyday language.

These words have their own specific meanings, but only take on their true meaning in their mutual relationship, their dualism.

In other words, they are mutually illuminating, mirrored reflections of each other, echos of each other, since we can often observe that evoking one usually calls the other to mind.

When we talk of peace, or even simply consider the concept of peace, then images of war automatically come to mind.

On the other hand, we find that the rewards of peace are most clearly articulated by the men and women who have actually been involved in a war. Has it not been said “the best war is the one you don’t have to fight”?

Note that a systematic consideration of ideas and concepts will often bring to mind actual events.