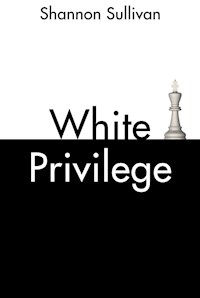 Some embrace the idea of White Privilege as an important concept that helps us to make sense of the connection between race and social and political disadvantages, while others are critical or even hostile. Regardless of personal views, it can be difficult to agree on what 'White Privilege' even means. Philosopher Shannon Sullivan cuts through the confusion and cross-talk to challenge what 'everybody knows' about White Privilege. Using real-life examples, she offers a candid assessment of the advantages and disadvantages of the term, to present a better understanding of how race functions in our societies. She argues that White Privilege is about more than race, that not only white people can have White Privilege, and that feeling guilty about privilege can have a negative effect on the very people you feel guilty towards. In the end, she offers practical solutions for eliminating White Privilege and building a fairer society. Sullivan's forcefully argued book will inspire you to think again about White Privilege and what it entails.

Introduction: What “everybody knows” about white privilege

1 “White privilege is only about race”

2 “Only white people have white privilege”

The right of Shannon Sullivan to be identified as Author of this Work has been asserted in accordance with the UK Copyright, Designs and Patents Act 1988.

First published in 2019 by Polity Press

All rights reserved. Except for the quotation of short passages for the purpose of criticism and review, no part of this publication may be reproduced, stored in a retrieval system, or transmitted, in any form or by any means, electronic, mechanical, photocopying, recording, or otherwise, without the prior permission of the publisher.

The publisher has used its best endeavors to ensure that the URLs for external websites referred to in this book are correct and active at the time of going to press. However, the publisher has no responsibility for the websites and can make no guarantee that a site will remain live or that the content is or will remain appropriate.

Every effort has been made to trace all copyright holders, but if any have been overlooked the publisher will be pleased to include any necessary credits in any subsequent reprint or edition.

For further information on Polity, visit our website: politybooks.com

IntroductionWhat “everybody knows” about white privilege

The idea of white privilege seems to be everywhere nowadays. At least since 2014, with the police shooting of unarmed Black teenager Michael Brown in Ferguson, Missouri, and the subsequent birth of the Black Lives Matter movement, it is no longer a topic confined to academic study.1 From Harry Potter star Emma Watson’s 2018 confession of her white privilege to Black Lives Matter’s criticism of white Philadelphians who damaged property after their team’s 2018 Super Bowl victory, white people’s racial privilege is being talked about by white and non-white people alike. It even has its own Twitter hashtag (#whiteprivilege). Not all of the talk about white privilege has the goal of eliminating it, however. Some of it questions whether white privilege exists and accuses people of color of making up the idea to get an unfair advantage over white people. Some of it accuses white people instead, charging elite whites with using the idea of white privilege to assert their moral superiority by shaming poor and working-class white people. In all the talk and crosstalk about white privilege, it’s not always clear whether people even mean the same thing when they criticize, support, and/or reject the term. So, what exactly is white privilege and how should we make sense of the various and often conflicting things said about it? And if it does exist, what should—or can—be done about it?

To answer this question, I examine beliefs about white privilege that might seem obviously true, but which I will argue are false in some important way. For example, is white privilege only about race? I will argue, somewhat counterintuitively, that a big part of the answer is no. Likewise, is the point of recognizing white privilege to get rid of it? I also will argue that, in a significant sense, the answer is no. In that way, this book aims for a kind of Socratic wisdom/ignorance concerning white privilege. The ancient Greek philosopher Socrates claimed that genuine wisdom is not found in knowing a large number of things. It instead is found in knowing what you don’t know. Realizing that we don’t actually know many of the things that we believe to be true about white privilege is what can lead to a greater understanding of it. Doing so, however, means taking seriously ideas or beliefs that can seem unwise or unpopular to hold, and that can be risky. (In fact, Socrates was sentenced to death for questioning the “wise” people and ideas that reigned in Athens in his day.) I ask you to take some existential risks with me in reading this book. While they won’t be as dangerous as the ones that Socrates faced, I should caution you that this is not a feel-good book.

Each of the book’s five chapters is titled with a supposed truth about white privilege. They build from definitions of white privilege, including the complicated issue of who has it (Chapters 1–2), to questions about action, including what can or should be done about white privilege (Chapters 3–5). While I hope that white readers will find this book particularly relevant to their lives, its analyses of white privilege should be informative and useful for readers of all races. For all readers, but perhaps for white readers in particular, I also want to underscore that the goal of this book is not to make white people feel guilty. While Chapter 3 will discuss white guilt in more detail, let me say here that I think that white guilt tends to be a red herring. Like the fish whose strong smell can throw trained dogs off the scent they are tracking, white guilt often distracts white people from the important question of what they can do to counter white privilege.

Having said that, however, it’s also important to emphasize that not feeling guilty is not the same thing as feeling confident and assured. This book is likely to make all readers, and perhaps especially white readers, uncomfortable. Questioning settled “truths” about white privilege can leave people unsure what to believe and what to do with regard to ongoing issues of race and racism. This is just as true for people of color as it is for white people. People of color might become less certain rather than more certain, for example, concerning how white people could be helpful partners in struggles for racial justice. This might sound like something to avoid: whatever their race, who wants to feel uneasy and unsure about fundamentally important questions? But unsettling feelings should not be avoided just because they are unsettling. If what we “know” to be true about white privilege often is wrong or incomplete in some significant respects, then feeling a bit disoriented and lost is a good first step toward finding a different way to address the issue.2

I will capitalize “Black” when discussing people of the African diaspora and use “black” simply to indicate a color. I will use lower case “white” for white people since they have not (yet) really figured out a racial identity apart from white supremacy and white privilege, and for that reason, capitalizing “White” would be misleading and/or confusing for my purposes here.

I wish to thank my editor at Polity, Pascal Porcheron, copyeditor Ann Klefstad, and two anonymous reviewers for helpful feedback on earlier versions of this book.

1“White privilege is only about race”

Nothing could seem more obvious than the belief that white privilege is about race. Isn’t white privilege about white people having unfair advantages because of their whiteness? Take the example of white people’s ability to browse in a department store without being tailed by undercover security guards. Black people in the United States often report being surreptitiously followed in public spaces such as this, treated as implicitly criminal, while white people generally do not have that experience. Isn’t this an example of social advantage that white people have over Black people because of their different races?

White privilege tends to be found in places and spaces where laws don’t apply. Benefitting from white privilege generally is not illegal, in other words, and that’s one of the things that gives it so much power. It operates outside explicit legal codification. This makes white privilege different from the racial advantages that white people had when discrimination against Black people and other people of color was legal, as it was in the United States, South Africa, and other countries well into the latter half of the twentieth century. There were laws explicitly naming race that could be fought or defended or whatever—but in any case, it was clear that they existed. They could be identified, pointed to, reckoned with.

That all changed with the end of Jim Crow, apartheid, and other laws legalizing racial discrimination and segregation. When it became illegal to grant social, educational, financial, and other advantages to white people, white people’s racial advantages became more difficult to identify. Many white people thought that perhaps those advantages really had been eliminated and the new laws were working to ensure equal opportunity no matter what one’s race. (Note that I did not say “equality,” as if the new laws assumed that all individuals and their aptitudes were the same. This sometimes is how anti-discrimination laws are criticized, even ridiculed, for allegedly operating with a fundamental misunderstanding of human nature.) For example, it could easily seem that equal opportunity for all races was achieved in the United States in the 1950s and 1960s if you are looking for racial advantages and disadvantages in their old forms. Black people don’t have to ride at the back of the bus or use “colored” water fountains anymore. But looking for racial advantage in that form today as evidence of white privilege is like looking for horse-drawn carriages on the highway as evidence of transportation. There isn’t anything there. Or so it might seem—because what you are looking for is a barrier to seeing what is