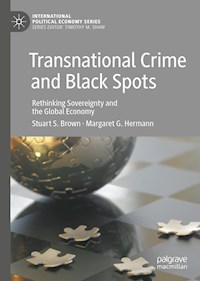 “The strength of this book is that it does not look at a single case or even a few disparate examples of drug, weapon, and human trafficking but looks at many patterns—intra-regionally, cross-nationally, and internationally. It is an innovative addition to the literature on the nature of the safe havens—or ‘black spots’—currently being used for illicit activity. This book will make a clear impact on the scholarship of transnational crime and the geopolitics of the illicit global economy.”
—Jeremy Morris, Aarhus University, Denmark

Transnational criminal, insurgent, and terrorist organizations seek places that they can govern and operate from with minimum interference from law enforcement. This book examines 80 such safe havens which function outside effective state-based government control and are sustained by illicit economic activities. Brown and Hermann call these geographic locations ‘black spots’ because, like black holes in astronomy that defy the laws of Newtonian physics, they defy the world as defined by the Westphalian state system. The authors map flows of insecurity such as trafficking in drugs, weapons, and people, providing an unusually clear view of the hubs and networks that form as a result. As transnational crime is increasing on the internet, Brown and Hermann also explore if there are places in cyberspace which can be considered black spots. They conclude by elaborating the challenges that black spots pose for law enforcement and both national and international governance.